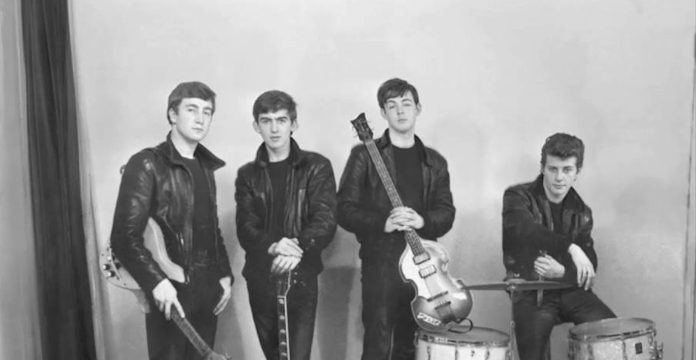 On a very cold New Year’s Day in 1962 the Beatles arrived in West Hampstead for their audition at Decca Studios.

The Beatles’ manager, Brian Epstein had several record shops in Liverpool and had a meeting with the marketing people at Decca. They told Dick Rowe – Decca’s A&R (Artists and Repertoire) manager – about The Beatles and he sent his assistant Mike Smith to Liverpool to see them at The Cavern on 13 December 1961. Smith was very impressed by the audience reaction and an audition was arranged in London for 1st January 1962.

Back in 1962, New Year’s Day wasn’t a public holiday but Dick Rowe was away, and it was left to Mike Smith to organise the session. Brian Epstein travelled to London by train, but John Lennon, Paul McCartney, George Harrison and drummer Pete Best, had to drive down the previous day in a van with their equipment. The freezing weather, with fog and snow, meant the journey took ten hours instead of the usual five. After getting lost, The Beatles finally arrived at the Royal Hotel in Woburn Place around 10pm on New Year’s Eve. Pete Best (who was replaced by Ringo Starr later that year) recalled what happened:

“Brian Epstein had read the riot act to us before we went down to London. You know, be good little boys, you mustn’t be out after 10 o’clock. And there we were with everyone else in the middle of Trafalgar Square as drunk as skunks. We were late getting to the Decca Studios the next day. Brian was there before us. He was livid and tore a strip off us left, right and centre. John said, Brian shut up, we are here for the audition’. (From: Love Me Do; the Beatles ‘62, TV documentary 2012).

The boys arrived at the Broadhurst Gardens studio at 11 o’clock and were not at their best after a long journey and a night of heavy drinking. Mike Smith was more than hour late himself, having been held up by the snow, and Epstein was very annoyed. They briefly met Tony Meehan who went into the producer’s box. He had grown up in West Hampstead and been the drummer with Cliff Richard and the Shadows before working as an assistant producer at Decca. The Beatles started to set up their equipment but the Decca engineers asked them to use the studio amplifiers as the group’s were in poor condition.

Over the next few hours The Beatles played 15 songs, mostly cover versions; only three were Lennon and McCartney originals (Like Dreamers Do, Hello Little Girl and Love Of The Loved). Epstein had persuaded them to do a set that he thought would show their range of ability, including Besame Mucho, The Sheik Of Araby, Money and Till There Was You. Lennon and McCartney later said they had wanted to include more rock numbers. Epstein thought the audition had gone well and he treated the boys to a meal at a restaurant in Swiss Cottage recommended by Mike Smith. 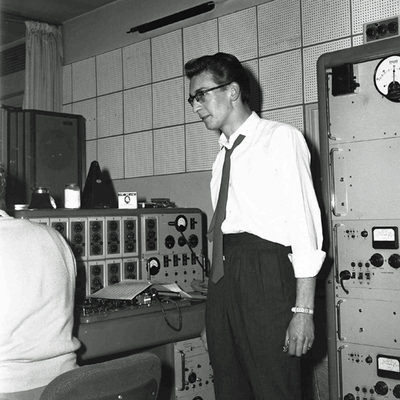 Later that same afternoon, Brian Poole and the Tremeloes auditioned at Decca. After the auditions Mike Smith wanted to sign both groups but Dick Rowe said they could only take one and told Smith to choose. He went with the Tremeloes because their audition was better than The Beatles’ and he thought it would be easier to work with a Dagenham band than a Liverpool-based group. Smith lived nearby in Barking. 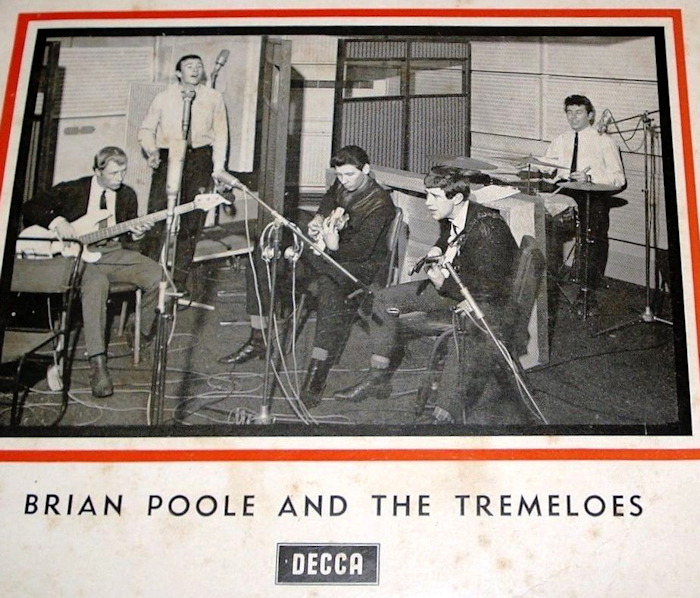 The Tremeloes at Decca

After numerous phone calls, Epstein was invited to lunch with Dick Rowe and the head of marketing on the 6 February. He was told that Decca had decided not to sign The Beatles. In his autobiography Epstein said he couldn’t believe his ears.

“You must be out of your tiny little minds! These boys are going to explode. I am completely confident that one day they will be bigger than Elvis Presley!”

He said that Rowe told him:

“Not to mince words, Mr Epstein, we don’t like your boys’ sound. Groups of guitars are on the way out …. Your boys are never going to get off the ground. We know what we’re talking about. You really should stick to selling recordings in Liverpool.” (From: Brian Epstein, A Cellarful of Noise London: Souvenir, 1964).

Dick Rowe strongly denied that he said this, and believes that Epstein was so annoyed that the Beatles had been turned down that he made it up. But the story stuck and Rowe went down in history as ‘the man who turned down the Beatles’. But this is unfair because it was Mike Smith who made the decision. And he wasn’t alone; as Rolling Stones manager Andrew Oldham pointed out in his autobiography, “Everybody turned them down. Columbia, Oriole, Philips and Pye turned the Beatles down, based on what they heard from the Decca session”.

Epstein left the Decca meeting with the tapes of the audition. He stayed in London for a few days and on 8 February he met Bob Boast, the manager of the large HMV record shop in Oxford Street. They knew each other from a seminar in Hamburg and got on well. Boast was not very impressed with the recording tapes in Decca boxes and suggested that Epstein go upstairs where there was a studio that could make copies onto disk. He thought these would look better when Epstein approached the other record companies. The disk-cutter Jim Foy was impressed by the fact that Lennon and McCartney had composed three tracks, as it was unusual at this time for a band to write their own material. Foy told EMI’s head of publishing Sid Coleman who arranged a meeting with George Martin, who was then the head of A&R at Parlophone, part of EMI.

You can listen to 10 tracks from the Decca session for yourself in the video at the top of the article.

Most critics agree that it’s hard to appreciate the Beatles’ potential from this material. They didn’t perform well nor did their unique talent emerge. The original tapes were recently sold at auction to a Japanese collector for £35,000.

You can hear Mike Smith, Pete Best and Brian Poole talking about their memories of the audition after 40 years:

Epstein met George Martin on 13 February 1962. Martin was not particularly impressed by the Decca sessions demo either, but he admired the confidence Epstein had in the Beatles and he was struck by the freshness of the three original compositions. In May, Martin told Epstein that he wanted to sign the group and the deal was done on 4 June, two days before their audition at Abbey Road. The band recorded their first hit, Love Me Do, there in September. It was released on 5 October and reached number 17 in the charts. Their second single, Please Please Me, was released on 11 January 1963 and reached number 1 in the NME and Melody Maker charts.

Liked the Rolling Stones
Although Decca did not sign the Beatles, it did get the Rolling Stones. On 10 May 1963, Dick Rowe and George Harrison were judges at a local talent competition at the Philharmonic Hall in Liverpool. George told Dick Rowe about a band he had seen who were very good. Dick returned to London and saw the Rolling Stones at the Crawdaddy Club in Richmond where they had a residency. Four days later he signed them to Decca. Their first single was Chuck Berry’s Come On, which was re-recorded at Decca Studios and released on 7 June. It reached number 21 in the charts. Shrewdly, manager Andrew Oldham wanted to retain the performing rights of the music and he produced most of the Stones’ other records at independent studios and then leased them to Decca.

Despite being lumbered with the tag of the man who turned down The Beatles, Dick Rowe in fact had a long and successful time at Decca. He went on to sign The Animals, The Moody Blues, The Zombies, Them (with Van Morrison), The Small Faces, Lulu and Tom Jones among many others. He died from diabetes in June 1986 at his home in Greenwich.

A rich history
What of the studio itself?

The building in Broadhurst Gardens was built around 1884 as a workshop and then converted into West Hampstead Town Hall. Despite its name, this was not a public building but a private venue that could be rented for weddings and concerts.

In 1928, it became the recording studio of the Crystalate Record Company. During the depression of the 1930s, small independent record companies struggled to survive. Decca and EMI bought most of them and became great rivals. EMI opened its Abbey Road studios in November 1931, and in 1937, Crystalate was acquired by Decca which moved all its recording to Broadhurst Gardens. Thousands of records were made here by Decca until the company left in 1981. As well as many classical records, these included sessions by David Bowie, Marc Bolan, Tom Jones, Lulu, Van Morrison, The Moody Blues, and Eric Clapton with John Mayall.

In its final form there were three main studios at Decca:
Studio 1: straight ahead as you entered the building, with the control room upstairs above the studios. This was used for many pop records.
Studio 2: a smaller room, was downstairs and was the main rock & roll and blues studio.
Studio 3: was opened in 1962 at the back of the building, and was large enough to take a full orchestra. Bing Crosby made one of his last albums, Feels Good, Feels Right, here in August 1976.

In 1974, The Moody Blues did a deal with Decca and took over Studio 1 as their Threshold Studios. They had made their previous albums at Decca and they recorded Long Distance Voyager at Threshold.

In 1980, Sir Edward Lewis, who created Decca in 1929, died. The company was sold to Polygram, and is now part of the Universal Music Group. The building on Broadhurst Gardens is now Lilian Baylis House, used by the English National Opera who took it over in November 1981.

Back in October 2017, I was asked by a Dutch radio station to give them a tour of the old Decca studios – it was also filmed and you can watch it here (the first bit is in Dutch, but the rest is all in English)

Gallery image with caption: The eventful life of singer and composer Turner Layton