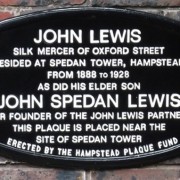 This year sees the 150th anniversary of the opening of the first John Lewis shop on Oxford Street. Named after its founder, there’s a local connection as John Lewis built a mansion in Hampstead and his son John Spedan Lewis was living in Mortimer Crescent, Kilburn, during the 1920s.

John Lewis worked as a draper’s apprentice in Wells, Somerset before borrowing a pound – or a sovereign as it was then called – and coming to London to seek his fortune. He worked as an assistant and then silk buyer and then in 1864 bought 132 Oxford Street, on the corner of Holles Street, the shop where his business blossomed and expanded. In 1906 he bought the Peter Jones store in Sloane Square.

John Spedan Lewis was his eldest son, born in 1885. The name ‘Spedan’ was chosen to commemorate Ann Speed, John junior’s great aunt. The family home was Spedan Tower, a turreted mansion set in three acres at Hampstead, overlooking Branch Hill. John Spedan led a very sheltered childhood with few friends; his father rarely entertained and holidays were generally spent with the family at Weston-super-Mare. Instead of going to university, 19-year-old Spedan entered his father’s business and it was he that began to develop the partnership model, after he realised that the income he, his father and his brother Oswald were receiving far exceeded the total payroll of his father’s staff. 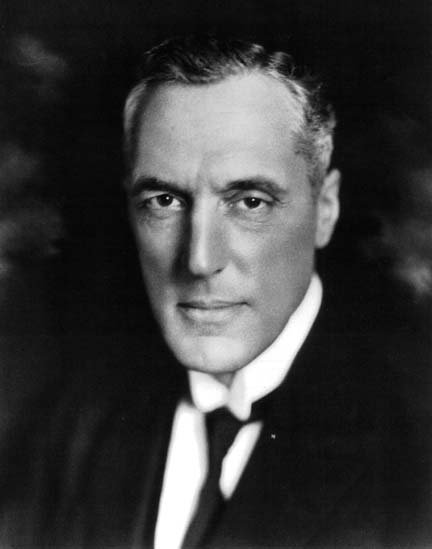 John senior wasn’t having any of it and nothing much could be done until 1914, when John Spedan was put in charge of Peter Jones, which was making large losses. His father insisted Spedan spend his working day at Oxford Street, stipulating he could travel to Sloane Square only after 5pm. Losses continued at Peter Jones but when John Lewis insisted his son give up the shop, Spedan refused. Instead he traded his lucrative partnership with his father for an uncertain future, namely complete control of Peter Jones. Despite dire predictions of bankruptcy, Spedan turned the business round and by 1919 he had converted an annual loss of £8,000 into a profit of £20,000, and began plans to introduce his Partnership idea. His financial success prompted reconciliation with his father, who declared, ‘That place is a great credit to the boy – a very great credit!’ In 1923, Spedan rejoined his father in partnership at Oxford Street.

Spedan believed women had an important role to play in business and that year he married Sarah Beatrice Mary Hunter, a graduate of Somerville College, Oxford. She’d joined the company before her marriage and continued to play an important role. Spedan and Sarah moved from 37 Harley House on the Marylebone Road to North Hall in Kilburn (even then, estate agents called it St John’s Wood). They lived there from 1925 until 1930. The large detached property, built in 1861, stood where Mortimer Place now meets Mortimer Crescent. Lewis also owned the house opposite, 6 Mortimer Crescent, which was used as staff quarters. 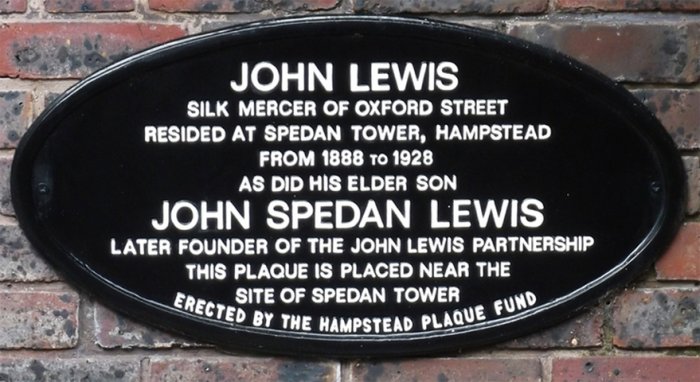 John Lewis snr died in June 1928, aged 93. The Hampstead home went to Spedan who sold it. Spedan acquired his brother Oswald’s share in the business and, while he was living in Kilburn, he launched the John Lewis Partnership in April 1929. He transferred the equity capital to trustees on behalf of the employees by means of an interest-free loan of nearly a million pounds, to be gradually repaid out of profits. But he was cautious and until the plan proved sound enough to hand control to those who worked in it, Spedan retained a controlling interest. This meant he could end the experiment any time he wanted. The final handover was delayed by the war until 1950.

There is a short film where John Spedan Lewis outlines his business philosophy:

The extensive grounds surrounding North Hall allowed Spedan Lewis to indulge his life-long love of natural history and wild animals. An ‘owlery’ was built to house his collection of pheasants and owls (managed by a Mr Gander!), as well as various animal enclosures and a kennel run. Spedan Lewis financed expeditions to collect rare species, which he bred in captivity and gave to zoos. In 1927 and 1928, he wrote in the ‘Gazette’, the firm’s house journal:

‘The Birds at North Hall’
I have here a small collection of birds which are, for the most part, rather exceptionally interesting. To see them properly takes about three-quarters of an hour or a little more. The birds can be seen without going through the house, so visitors in this way need not have any fear of causing inconvenience.

Although an appointment was necessary, ‘partners would be very welcome to bring friends, especially children.’

Spedan Lewis also collected wild animals. A colleague described what happened during regular games of tennis at North Hall: “He had a tennis court made with cages at each end in which he kept lynxes. One of those cages was up against the back netting so if you went to pick up your ball, there was a lynx about a foot away.”

In 1929, Lewis moved his family and menagerie from Kilburn to the Leckford estate in Hampshire (today owned by Waitrose). North Hall and 6 Mortimer Crescent (‘the cottage’) were put up for sale by the John Lewis Company in 1932. The details give some idea of the scale of the property.

Despite the “first rate” tennis court, there was a lack of buyers and the company tried to develop the site. A proposal was made in 1933 to replace the main house with seven smaller ones, and although the authorities were inclined to give permission, instead the house was reported as sold in January of the following year, for just under £3,000, worth about £175,000 today.

Constance Lynn was Spedan Lewis’ secretary and housekeeper from 1928 to 1961. She reminisced about her employer and her punishing work regime.

We used to work in London during the week and go to Leckford, Mr Lewis’s country house, at the weekends, still working. It was a seven-day-a-week job. We were sometimes expected to work until midnight and produce the answer at the breakfast table. Hours and weekends were nothing to Mr Lewis. And holidays were, in his own words, ‘plainly inconvenient’. We didn’t get any rest. Occasionally I was allowed a weekend off and went home. We just grabbed what we could. Really, we gave our whole lives to Mr Lewis. I think it was the pure magic of the man. We could have murdered our boss at times but we had the many perks which most secretaries don’t have, like being taught to ride, taught to drive a car, taken to Switzerland. I shall be ever grateful for the education I got with him.

The Lewis skiing holidays might last a month, but although enthusiastic, Spedan wasn’t very good.

In 1955, John Spedan Lewis retired on his 70th birthday, (a move he later regretted and tried to reverse) and lived at Longstock Park, Hampshire, until his death in 1963.

What was he really like? Undoubtedly a reformer and altruist, Constance Lynn revealed Spedan was also a demanding employer. The preface to ‘Retail Trading’ (1968), a privately published collection of John Spedan’s memoranda, put it even more bluntly:

He was vain and cantankerous … sometimes cruel in the intellectual arrogance with which he treated individuals who were his mental inferiors … he certainly sacrificed his family to his dream of partnership.

For a more balanced view his Times obituary said:

To the last an unrepentant and indeed aggressive individualist, he yet created one of the most distinctive and successful co-partnership organisations. A man of high purpose, unbridled imagination and great courage, he was outspoken but had in many respects the most kindly and generous disposition. He was an all-round sportsman, an omnivorous reader, greatly interested in natural history and music.

Even the John Lewis Gazette acknowledged his views were like salt, “that can either sting or give savour”. It concluded, “His was simply the uncompromising voice of a great individualist.”

In 1941, North Hall was unoccupied and was being used by Hampstead Council as a temporary furniture store when it was badly damaged by a V1 flying bomb. (The same bomb forced George Orwell to vacate his flat across the road, at 10a Mortimer Crescent). The site was subsequently cleared and now forms part of the Mortimer Estate. Spedan Tower in Hampstead was requisitioned by the War Office and in 1947, became home to a number of German scientists undertaking ‘secret research work for Britain.’ The house has been replaced by houses and flats. A Heath & Hampstead Society plaque commemorates John Lewis and John Spedan Lewis near the site of their old home.