While people marched in London and we bombed Libya, what was happening in leafy NW6?

New arrivals on Twitter included The Alexandra & Ainsworth Estate, Nail Suite and (after advertising it for months) LoveFood.

On April 13th, a steam train will chug into West Hampstead on a public service. Timetable here.

Ricky Gervais spoke out about the planned closure of Netherwood Alzheimers Centre.

Sunday was the Friends of West Hampstead Library relaunch / “use your library” day.
Meanwhile there was a nice photo posted of John, who sells books by Thameslink.

In South Kilburn, some allotments were rediscovered, and details on the new masterplan published.

The Wanderers lost, sadly confirming their place at the foot of the table.

Photo of the Week
A bit early still, but this photo by Chris captures the most attractive shop window on West End Lane at the moment – Gustoso. 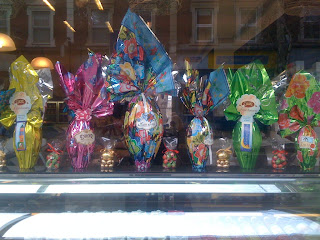 How Gung-Ho were we about long-standing local Chinese? Imaginations run riot as Oddbins falls into administration