It was a hectic week in the world of West Hampstead between police helicopters and the biggest Whampather yet. So lets dive straight in.

A large police operation on Tuesday afternoon caused consternation as the police helicopter hovered over West Hampstead. A man with an airgun was holed up in a block of flat in Childs Hill and was later arrested and charged with criminal damage.

A man was found hanging from a basketball hoop in Hilgrove Road on Wednesday morning. Police are not treating the death as suspicious.

HS2 is back on the agenda, and will pass through South Hampstead although homes around here shouldn’t need to be demolished. HS2 would also mean the end of the Queens Park to Euston section of the Overground.

Local MP Glenda Jackson asked about HS2 in the Commons; here’s a list of Glenda’s surgeries through June.

Thameslink says the northern (old) entrance won’t reopen until Jan 30th – it was supposed to be mid-January but apparently they’ve had to redesign how the ticket machines are mounted.

There are some Kilburn High Road retail units available (around WH Smiths).

The two Café Bons, are no longer owned by the same person – the original one may need to change its name.

Are the Liberal Democrats invincible in Fortune Green?

The beleaguered West Hampstead Community Centre is looking for a new manager.

Whampgather was a big success, and we raised £530 for The Winch.

Photo of the Week
After a week of glorious sunsets and dramatic sunrises, here’s the pick of the bunch courtesy of @SJAttree 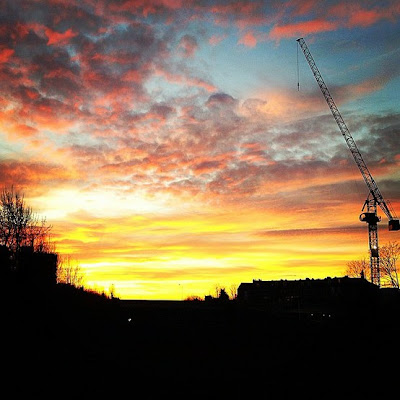 We came, we saw, we gathered Transition Whamp: Grow your own