Dennington Park Road is the place to be on January 30th. One one side of the road, the Conservatives are holding their US-style primary to determine who will be their candidate for Hampstead & Kilburn in the next general election. On the other, in the library, those good burghers of West Hampstead, WHAT (West Hampstead Amenities and Transport, for those of you who didn’t pay attention in class last term) are holding their AGM followed by a public meeting about transport. Who said West Hampstead wasn’t edgy?

There are a few transport updates to share with you, based on WHAT’s meeting with Camden late last year. There were four points on the agenda for that meeting:

After the meeting, Camden’s cabinet member for transport, Phil “20mph” Jones promised a separate transport meeting in the north of the borough for full airing of grievances. And it has come to pass. Phil will share the platform with Barnet & Camden London Assembly member Andrew “Colemanator” Dismore and a guy from TfL called Steve.

WHAT’s AGM runs from 7.30pm-8.15pm. There’s 15 minutes for refreshments and then the public meeting gets underway with a 9.45pm finish time. All are welcome. 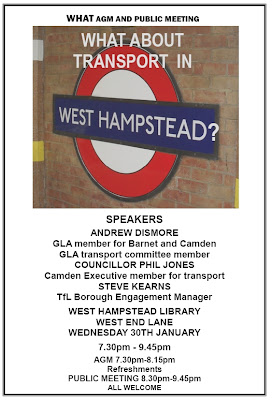