The O2 is undergoing something of a transformation, as we’ve discussed. Today was an important landmark in this evolution as Byron opened. Byron is a burger chain that began as an idea in 2007 and now has 27 locations in London and a few further afield.

Its main claim seems to be that it does a good straightforward burger and it does it well, in a nice atmosphere. I thought I’d go along to the latest Byron and check it out, while keeping my Twitter followers up to speed.

There was some surprise that I’d never been to a Byron before, but to be honest I don’t go to burger places that often. I like a good burger for sure, but almost never have one in this country that delivers the whole package. I’m fortunate (if that’s the word ) to have been to some strange off-the-beaten-track towns in the US and even in some out of the way holes, you can still get burgers that put most of the premium offerings here to shame (kudos to the first burger joint here that can put bison burgers squarely on the map).

Anyway, back to Byron. The wide frontage is inviting and the glitzy showbiz sign fits in rather well. 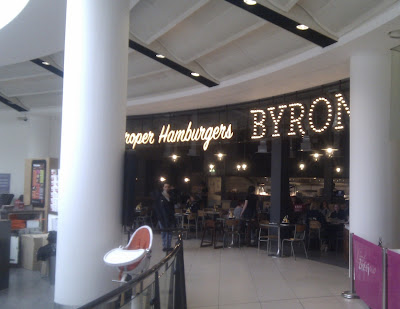 All in all, a decent first day for them. My waitress was particularly friendly and smiley. I did mention that my burger was bizarrely unevenly cooked (although as I said to them, I actually prefer burgers slightly underdone so it didn’t affect my enjoyment of it) and as the manager came over to get my feedback I was willing to share the good and the disappointing.

The cinema crowd will be a big part of their business, and I expect they will do a healthy lunch trade from local businesses and kids during the holidays. It’s not the cheapest burger place around – even with the discount, although throwing in a fairly generous tip, my bill came to £20. But it fills a gap in the market and the formula is clearly working well for the chain to expand at the rate it is.

Just one teeny thing… here’s the card they give you at the end (it’s a three of diamonds on the other side – dunno why). 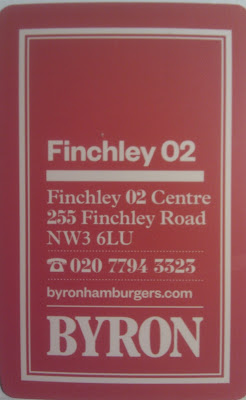 I leave you with the video from Byron’s website. Not because they’re paying me to (they’re not), but because I actually rather like it and I had the same trouble getting ketchup out of the bottle. The little book from which the photo earlier was taken is the stills version of this video.

How much for this letter to the Corinthians? Census: Finding the rock god