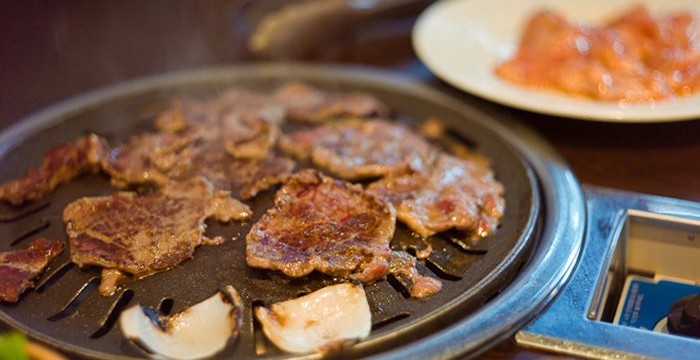 A couple of weeks ago we took 24 people to Seoul on Finchley Road for #whampdinner. It’s not a restaurant most people were familiar with, so what did we think?

Tom: I was interested to see what Seoul was all about, having not eaten Korean for quite some time, and only done the table-top cooking with such cuisine on one previous occasion. In the event, my table bottled-out altogether, with not a single one of us mustering up the courage to try what is clearly their main speciality!

Vegetable dumplings with a soy dipping sauce were fine, and got things off to a positive start.

However, trying a seafood noodle dish, curious as to how this might vary from a Chinese, or Thai, equivalent, didn’t prove to be the most inspired decision. The thick udon noodles were pleasingly “chewsome”, but tricky to manage with the (very charming) thin steel chopsticks (albeit I am like a drunk stick insect when juggling such utensils). My bowl included one prawn, which being in its shell was even trickier to actually eat, as was the solitary mussel. There was plenty of squid however, which was most definitely on the rubbery side, though not inedible. Not unenjoyable, then, but all a little flat.

Other plates such as those where you mix a raw egg into a hot mixture of rice and things, were generally lacking in seasoning. Service was fine, though it proved very taxing for the kitchen to get main dishes out together.

So in summary, no major food crimes in evidence, but for those choosing simple options, I’d like to see a little more heart and “s(e)oul” in evidence. (Apologies – pathetic!)

Jonathan: Both the other two tables embraced the barbecue concept with gusto and overall it was pretty good. Our waitress really looked after us and made sure everything was cooked properly. We had rice on the side and a small selection of starters including gyoza-type dumplings and the obligatory kimchi. 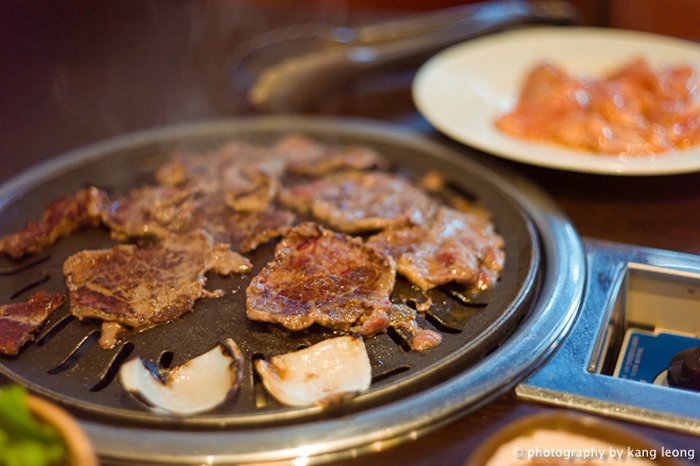 Barbecue meat at Seoul- photo with permission by LondonEater

If you fancy something filling and not too expensive then the bimbimbap dishes aren’t going to leave you hungry even if, as Tom suggests, they’re not exciting. The bulgogi and the barbecue meat in general though is well worth trying – and it’s a fun way to spend the evening with a group of friends. It’s the second time I’ve been to Seoul and I think it’s well worth the trip if you fancy a change from West End Lane.