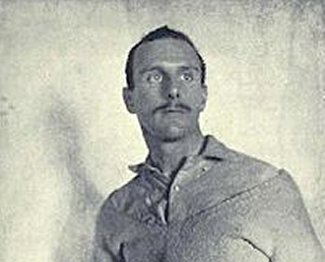 As we wait and hope that Andy Murray can repeat his Wimbledon success of last year, few people know that West Hampstead had its very own tennis world champion in the 1890s and 1900s.

New West End House (later called West End Hall) faced West End Lane, near the Green. The house has a long history but we’re concentrating on the Miles family who owned the property for more than 70 years. (The mansion and its grounds were built over from the late 1890s, to create Fawley Road, Honeybourne Road and Crediton Hill).

Publisher John Miles married Ann Chater in 1810; and the couple moved to West End three years later, where they stayed and brought up their eleven children. Eustace Hamilton Miles was their grandson, and was born at West End in 1868. 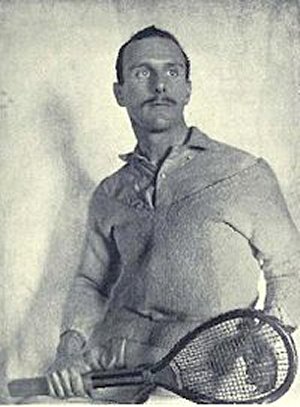 He went to Heath Mount school (near Whitestone Pond) and Marlborough College, where he played tennis and squash and was a member of both cricket and football teams. Eustace went to Kings College Cambridge in 1887, gaining a B.A. and M.A.. At Cambridge he began his distinguished career in racquets (an early form of squash), and real tennis, playing against Oxford.

Eustace won an amazing number of English and world titles, including a silver medal at the 1908 Olympics in real tennis.

Real tennis or ‘jeu de paume,’ was a precursor of lawn tennis, and was played in an indoor court. This was the only time the game was included in the Olympics. (For more on real tennis, read Historical Dictionary of Tennis, by J. Grasso (2011)).

Grasso acknowledged Miles to have been one of the best players ever. Eustace was still playing competitively in his 40s and winning tennis matches against far younger players. In 1910 Miles wrote to the Times,

People seem to imagine that after 30 a man is no good. I am in my 42nd year, and am thoroughly fit, I hope. Men ought to be in their prime – at least for strength and endurance and nerve – at 35.

A few years later he said,

Some sports are best given up at an early age. Football would be the first to go, and that when a man is about 25 years of age, racquets should follow. To cricket and tennis, however, I would by no means place any limit.

Eustace’s other great interests were diet, health and, not surprisingly, regular and targeted exercise for adults and children. He became a prolific writer on aids to learning, sport, religion and history as well as dietary regimes with nearly 80 books under his name (or joint authorship); his wife has an additional 20 titles to her credit, largely dealing with the subject of vegetarian food.

Eustace told a reporter that he, ‘loathed and detested’ the word ‘vegetarianism.’

I dismiss that word. It stands for cranks and bewhiskered gentlemen and other undesirable people. My slogan is a “balanced, meatless diet.” I eat vegetables, eggs and cheese like yourself and others, in their right proportion.

He embraced this diet early in his sporting life, ascribing his many successes to his food regime:

He had lost tennis matches from cramp believed to be due to the eating of flesh, and that he has won a racquets match on a glass of hot milk fortified by two teaspoons of mild powder. His habit is to take no breakfast and only a light lunch. At his evening meal he takes salad, Hovis bread, and fruit, with sometimes a cup of tea.

Eustace married Dorothy Beatrice Harriet Killick (known as Hallie) in March 1906 at St Clement Danes church in the Strand, where her father Rev. Richard Henry Killick had been Vicar during the 1860s. When Hallie was struggling with depression after her father’s death in 1903 she was helped by reading Eustace’s book Expression and Depression, and was inspired to write a book about her own experiences. She found Eustace’s address and contacted him: “The friendship grew, and Miss Killick, having been finally converted to Mr Eustace Miles’ methods of diet, decided to adopt vegetarianism and marriage“.

Eustace took his interest in food to the next level, starting The Eustace Miles Restaurant Co Ltd with Miles as managing director. Included among its shareholders were Eustace’s old school and college friend, novelist E. F. Benson, playwright George Bernard Shaw and the headmaster of Eton. The Eustace Miles Restaurant opened its doors at 40 Chandos Street in May 1906.

The aim is not simply to avoid meat and other flesh foods, but it is primarily to select a variety of nourishing and sustaining foods which may take the place of flesh foods as builders of the body.

Miles supported the suffragette movement and the restaurant became a meeting place for and a favourite of Sylvia Pankhurst. Talks were held there and suffragettes released from Holloway Prison were taken to Chandos Street for breakfast. Edith Craig campaigned for Votes for Women from a pitch outside the restaurant.

The restaurant’s windows were dressed with tins and packets of food produced by another of Eustace’s companies or copies of Healthward Ho!, his monthly magazine. The menu included references to ‘N’ ‘N.N’ and ‘F.U’, meaning the dish in question was ‘nourishing’, ‘very nourishing’, or ‘free from uric acid’. A 1914 review was favorable but said some dishes lacked flavour. They may well have tasted bland compared to the rich and highly seasoned food of the period. However, the restaurant prospered during WWI when meatless cookery became common, offering “balanced meals, nourishing and sustaining”.

People poked fun at Eustace and what they viewed as his dietary fads. In 1906, a poem appeared in praise of the mutton chop:

I love it! I love it! Let those who please
Enjoy a diet of nuts and peas;
Let Shaw compose his dramatic scenes
On cabbage, tomatoes and kidney beans
Let Eustace Miles find muscular force
In carrot cutlets with Plasmon sauce,
Or other equally messy slop –
But give me my old fashioned mutton chop.

Plasmon was another Miles’ food product, advertised as 30 times more nutritious than its only ingredient, milk.

Next time you shall come to lunch with me at Mr Eustace Miles’s.
With pleasure.
No, you’d hate it,’ she said, pushing her glass towards him for some more cider. It’s all proteids and body-buildings, and people coming up to you and beg pardon, but you have such a beautiful aura.

Despite expanding into healthfood shops, opening a second restaurant in the Kings Road and a guest house in Carshalton, Eustace’s business empire eventually crumbled. He talked a lot of sense on many subjects but there wasn’t enough support for his food, ideas and books; he’d been “unduly optimistic” said a judge at one of the bankruptcy hearings. Chandos Street closed in December 1933, the victim as Eustace saw it, of “an age of luxury”.

People today would rather spend 5sh on having their hair waved, or on cigarettes, or on entertainment than on good meals. When it comes to spending a mere shilling on healthy food, they prefer a sticky bun and a cup of coffee for five pence and the rest for amusement.

Eustace was declared bankrupt the following January and the restaurant furniture and equipment was auctioned off. Among all the items of cutlery, table linen and kitchen utensils were six pianos!

Eustace and Hallie lived for many years in Ridgmount Gardens, off Tottenham Court Road. After the bankruptcy they moved to Fulham and then south of the river to Battersea. Hallie died in 1947 and Eustace just a few days before Christmas 1948.

An obituary of Eustace Miles said:

He was original, independent and ingenious in all he undertook, and his own entry in Who’s Who, with its reference, among his recreations to “punning, riddle-making and patience” was characteristic.’

What have I missed since June 23rd?