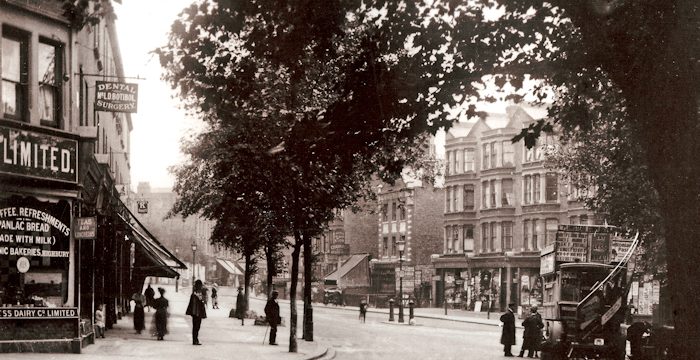 One hundred years ago, West End Lane was a very different place – though there were some similarities with today’s busy commercial street too. At the end of this article is the street directory from 1916. 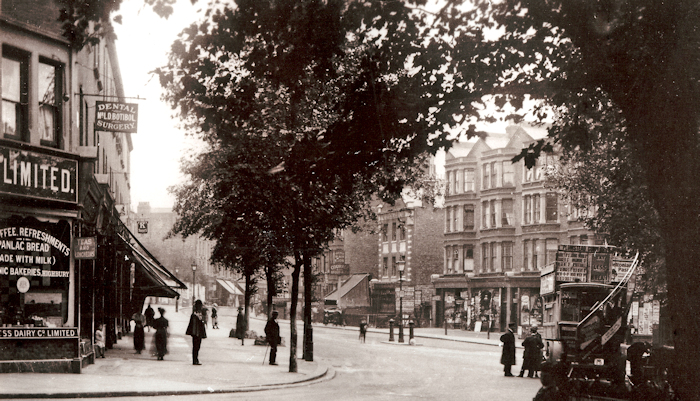 There were far fewer eating places and bars in 1916 than there are today – though some still exist. The dining rooms at Nos. 291 and 327 are still restaurants (One Bourbon and Thunderbird Bar respectively). The Railway Hotel is still there at No. 100, having gone through several changes, and The Black Lion is much older still, though in 1916 it was just another unnamed beershop. Further down towards Kilburn, another unnamed beershop at No. 12 was the Bird in Hand, which is now a residential building.

In 1916, coal was still an important domestic fuel, brought by train and unloaded in West Hampstead’s extensive railway sidings before being delivered to your door. Coal merchants were prominent either side of Iverson Road and opposite, at Nos.144, 154 and 156.

The seven large houses between Acol Road and Woodchurch Road (38 to 50 West End Lane), were destroyed by a V1 flying bomb on 20 June 1944. This was the first of nine Doodlebugs that landed in West Hampstead and Kilburn. This one killed 18 people and caused huge damage. It was left as a bomb site until Hampstead Council opened Sidney Boyd Court in 1953. Sidney Boyd was a doctor, local councillor and mayor of Hampstead for seven years throughout the war.

The railways that define so much of West Hampstead’s landscape were of course already up and running by 1916, and all three stations existed, though the train lines were all different. The Jubilee Line was the Metropolitan Railway. The Overground station was “West End Lane” station on the London and North Western Railway, while the Thameslink line was the Midland Railway.

Ernest Owers and Williams had opened in 1872 and was influential in the development of West Hampstead and Golders Green. In December 1931, Ernest Owers was the victim of a violent attack at the West End Lane office. He had notified jeweller Ernest Phillips that the mortgage on his shop must be paid off. Phillips came to the office yelling at Owers, You are a robber and a thief and I shall put you away. Then he suddenly threw nitric acid into Owers’ face, which narrowly missed blinding him. In court, Phillips said he was sorry, but the judge said a severe punishment was called for and sentenced him to three years imprisionment. Ernest’s wife died a few months after the attack, while he moved to Brighton where he died in 1938. Ernest was an extremely wealthy man and left the equivalent of around £19 million and as he had no children, most of the money went to hospitals and other good causes.

No.90 West End Lane was the West Hampstead Police Station which opened in 1882 at a cost of £3,971. This is now a council-run hostel (on the corner of West End Lane and West Hampstead Mews. The police station had an inspector’s office, a charge room, a waiting room and three cells. The largest cell was known as ‘the drunk tank’. The police station moved to its current location in Fortune Green Road in 1972.

Perhaps the most striking difference between 1916 and 2016 is the huge variety of independent shops that existed a hundred years ago; from the usual grocers, butchers and bakers; to boot makers, a photographer and a cycle shop. Charles Debenham at No.222 was a member of a photographic family; his father William Elliott Debenham had studios at 158 Regent Street and Haverstock Hill. In 1916, much of their work would have involved photographing members of the armed forces, leaving for the Front. Edward Pond at No.349 had taken over from the Delevante Cycle Works which opened in 1892. Pond, who diversified to include motorcycles, traded here until 1939.

Today’s West Hampstead Fruit and Vegetables, at No.243 was a chemist for many years. Alban Atkin took over from a homeopathic chemist in 1904. A local councillor, he is buried in Hampstead Cemetery and was succeeded in the business by his son of the same name. The shop closed around 1990 and was a timewarp right to the very end, with large glass fronted wooden cabinets and beautiful glass apothecary jars. The dispensary was at the far end of the shop, under a huge clock. The window display was a low key one, and for many years its centrepiece was a red neon sign advertising Yardley cosmetics.

There were also a large number of doctors and dentists scattered along West End Lane. The large houses attracted professionals.

Given today’s debate about 156 West End Lane, it’s interesting to see that back then it was the home of the Canforde Lawn Tennis Club – which was on open land behind 156, though only from 1914 to 1917.

Here is the full street directory. It is a little hard to follow in places, as it swaps between the east side and west side. However, the cross-street names and of course the numbers, make it reasonably easy to decipher. One road name change: Chislett Road was renamed as a continuation of Companyne Gardens in 1936. 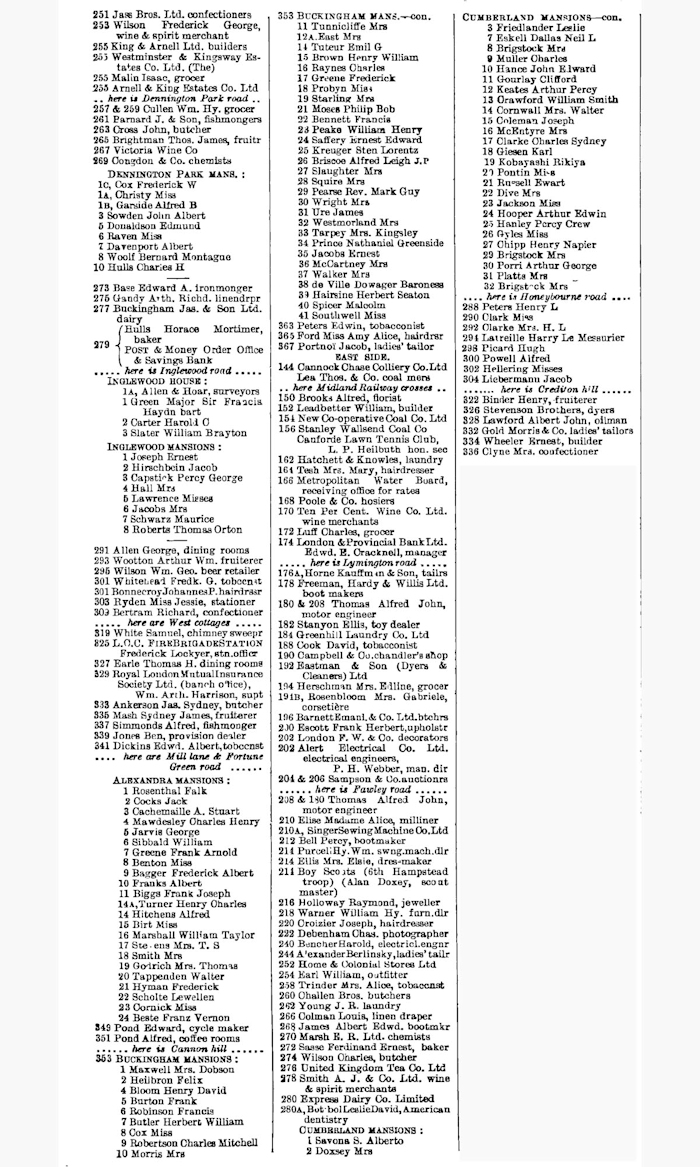