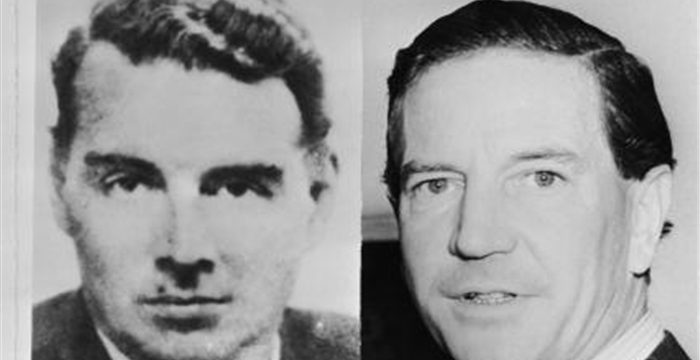 During the 1930s, Soviet intelligence recruited a group of young, idealistic Cambridge students who saw themselves supporting Communism against the spread of Fascism. After university, they held important posts in the Foreign Office and the Intelligence Service and passed secret information to the Soviets. They were not discovered until 1951 when two of them – Guy Burgess and Donald MacLean – escaped to Russia before they could be arrested.

Another member of the group, Kim Philby, grew up in Acol Road, and this is the story of him and the other famous “Cambridge Spies”, who met regularly at a flat in West Hampstead.

Kim Philby
The Philby family lived at 18 Acol Road from 1925 to 1950. Harry St John Philby was a diplomat who mainly worked in India and the Middle East. His son Harold Adrian Russell Philby, known as Kim (from the Rudyard Kipling novel of the same name), was born in India in 1912. Educated at Westminster School and Trinity College, Cambridge, Kim was recruited as the first of the ‘Cambridge Spies’ in 1934.

After a spell as a journalist for The Times and the Daily Telegraph, Philby began working for the Special Operations Executive (an espionage unit) at the beginning of the war and by September 1941 , was seconded to the section of MI6 responsible for counter espionage. After the war, in September 1949, Philby was posted to Washington in a key position as the liaison officer with the CIA.

When his fellow Cambridge spies, Burgess and Maclean, defected to Moscow in 1951, Philby was suspected of being ‘the third man’. He was interviewed by MI5, at which point he resigned from MI6. In September 1955, the Sunday News named Philby as the third man. On the 7 November, Harold Macmillan, then Foreign Secretary, announced in parliament there was no evidence that Philby had warned Burgess or Maclean, and he was not a spy. With typical bravado, Philby called a press conference at his mother’s flat and calmly denied any involvement. You can see a short film clip of the press conference here:

Although he had survived the third-man episode, MI5 was still very suspicious about Philby and continued to investigate him. In January 1963, as the net was closing in, Philby disappeared from Beirut, where he was working as a journalist, and gained political asylum in Moscow. Once in Russia, Philby discovered that he was not a colonel in the KGB, as he had been led to believe. He was placed under virtual house arrest with all his visitors screened by the KGB and paid only a small allowance.

It was ten years before Philby even visited KGB headquarters, where he was given a little work talking to trainee spies. He died in Moscow, very disillusioned, in 1988 aged 76.

Kitty Jarvis and Conway Stewart Pens
Catherine Florence Bishop, known as Kitty, was born in Kensington in 1884. She was the daughter of Charles and Catherine Bishop. In 1891 they were living at 108 Norfolk Terrace (today’s Westbourne Grove). Her father was in charge of a branch post office and worked as chief telegraphist and a Morse code expert, before moving to the Civil Service. By 1901 the family had moved to 39 Ladbroke Road and Kitty aged 16, was a probationary telegraphist.

In 1907, Kitty married her childhood friend, Francis Charles Jarvis, known as Frank. Born in 1881, he was the son of Edward Jarvis, a stationer and newsagent who worked for W.H. Smith for 20 years before taking over a shop called ‘Wade’s Library’ at 25 High Street Kensington in 1888. Frank worked in the shop himself and then joined Henry Mead and Sons, a large wholesale stationer. In 1905, the young Frank Jarvis set up a new business, Conway Stewart, to produce elegant pens. His partner was Howard Garner. Exactly why they chose the name is not clear, but the company became very profitable. In the 1911 census Frank and Kitty were living at 28 Hargrave Villas, Hartswood Road, Ravenscourt Park, and Howard Garner lived next door at No.30.

During WWI, Frank joined the Royal Army Service Corps and was based at Aldershot as a captain and adjutant. He was a keen sportsman; he taught himself to ride and won several equestrian events on a horse called Spider. He also loved boxing and was a keen amateur fighter. On a business trip to the United States in 1919, he watched the world championship match when Jess Williard lost his title to Jack Dempsey.

About 1930, Frank and Kitty moved to ‘Allendale’ in Oxhey Road, Bushey. This was an elegant house with its own tennis court. But the marriage was unhappy as Frank was devoting most of his time to the business and Kitty felt neglected. His love of oysters brought about Frank’s premature death in December 1932, when he contracted typhoid fever after eating a contaminated batch. In his will he left £12,870, worth about £750,000 today. 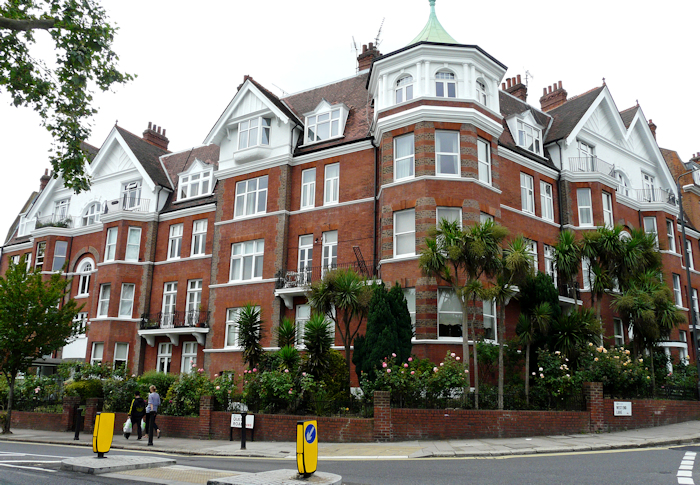 From the beginning of WWII until 1957, Kitty lived in Flat 12 Douglas Mansions (now Douglas Court), on the corner of Quex Road and West End Lane. During the war she worked in the Cipher Division of Military Intelligence and was the personal assistant to Anthony Blunt at MI5, where she shared the outer office with Guy Burgess and Donald Maclean. Blunt was the fourth Cambridge spy.

Kitty was known affectionately as ‘Mater’, friendly and efficient, with an almost motherly approach to the young men. Bond creator Ian Fleming was a regular visitor to the office and there is even some speculation that Kitty was the inspiration for Miss Moneypenny although a recent discovery of Fleming’s letters suggests that in fact Moneypenny could be based on Loelia Ponsonby, the wife of the 2nd Duke of Westminster.

On many evenings, Kitty and her daughter Audrey were taken out to dinner by Burgess and Maclean. In retrospect, this was a good cover, as Kitty did not suspect they were gay. Kitty even lent her flat in Douglas Mansions to Burgess, Maclean and others when they told her they needed somewhere for a private discussion of military intelligence matters. Other guests included Ian Fleming, John Cairncross, Noel Coward and Lord Rothschild.

Commander Lionel ‘Buster’ Crabb often came to see Kitty in Douglas Mansions as he had virtually been adopted as a child by Frank Jarvis when his own father died. In Gibraltar during WWII, Buster became an expert frogman for the Royal Navy and in April 1956 MI6 asked him to dive and explore the propeller of the Russian cruiser in Portsmouth harbour that had brought Khrushchev and Bulgarin on a diplomatic mission to Britain. Buster disappeared under suspicious circumstances and his body was only found over a year later when it was caught in fishermen’s nets. Ian Fleming, who knew him well, used the incident in Thunderball, when James Bond dives under a boat and has a dramatic underwater fight.

Another frequent visitor to Douglas Mansions was nicknamed ‘Oscar’. This was Jacky Hewit (1917-1997), an actor, singer and dancer who had been in West End shows such as No No Nannette. He was the lover of Blunt, Burgess and Christopher Isherwood. Jacky became good friends with Kitty and often took her to the theatre leaving Burgess and Maclean alone in her flat.

On the morning of 25 May 1951, when Jacky was living with Burgess at Clifford Chambers, 10 New Bond Street, he took Burgess a cup of tea and then left for his office. Maclean had only recently told Burgess that he thought he was in trouble, pointing out two men who were following him in Pall Mall. Later that day, Burgess received a phone call from Western Union relaying a telegram from Kim Philby in Washington about a car he had left behind there. In reality this was a coded message informing Burgess that Maclean was about to be interrogated. Burgess hired a car and collected Maclean from his house in Surrey. At 9pm the two men drove to Southampton where they took the cross-channel ferry to St Malo, the first stage in their journey in defecting to Moscow. They remained in Russia for the rest of their lives. Burgess died from chronic liver failure due to alcoholism in 1963, and Maclean died of a heart attack in 1983.

In 1964 while Kitty was living with her daughter Audrey in St Albans, she was interviewed by two men from MI5 about Anthony Blunt’s activities. Kitty was shocked as she greatly respected Blunt and knew nothing about his spying. She died in 1971 in St Albans before he was publicly exposed as the fourth man in 1979. John Cairncross was named as the fifth member of the Cambridge spy ring in 1990.

For more on Conway Stewart see Stephen Hull’s history of the firm, Fountain Pens for the Million (2011). For more on Buster Crabb, see Don Hale’s well researched book, The Final Dive: The Life and Death of Buster Crabb (2009).