Here are two stories with newspaper illustrations about young men in Kilburn who acted badly while under the influence of drink.

The Amorous Carpenter
In October 1897, ‘amorous young carpenter’ Frank Pelham was in court for assaulting an unnamed, ‘well-dressed, good-looking young woman’on the Kilburn High Road, outside Brondesbury Railway station. It was around midnight and she’d been waiting for the Cricklewood bus when Frank came up to her and said, ‘Good evening, dear.’
She didn’t know him so she walked away saying, ‘please leave me alone, don’t follow me’, but Frank persisted and tried to catch hold of her. The woman hit Frank with a small parcel she was carrying, but before she could get away, he kicked her ‘in the body’. She managed to find a policeman and the magistrate commended her courage in getting Frank into custody and being willing to give evidence against him in court. 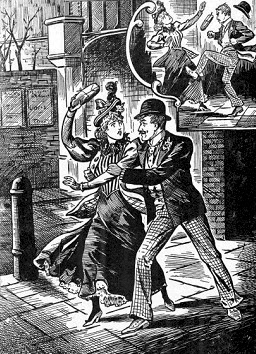 Frank entered a plea of ‘guilty’, saying he acted under the ‘fluence’, in other words, he was drunk.
The magistrate took a hard line, saying,
‘It was a monstrous thing to stop a respectable young woman in the street and strike her after she showed your addresses were not congenial to her. Such a case must be dealt with severely as a warning to others.’
Frank got two months in prison with hard labour. The son of a carpenter, Frank had followed the same trade and lived in the Kilburn neighbourhood for most of his life. He was born there in 1868; was living in Paddington (1871); 6 Palmerston Road (1881 & 1891). At the time of the incident he lived at 82 Iverson Road and 23 Iverson Road (1901 and 1911). This was his address when he died in 1920. He was buried at Hampstead Cemetery in what was then called a ‘common grave,’ containing multiple, unrelated burials.
Let’s have a snowball fight!
On a cold evening in early March 1898, Mrs Florence Moule was on her way home to Kentish Town from Kilburn, where she’d been on business. It was 11pm as she walked along Belsize Road and met Charles Crossley, a 27 year old student, who lodged in the road. He walked straight up to Florence, who said in court,
‘That he pushed her against a wall and disarranged her clothes. With some difficulty she wrested herself from his grasp, and thereupon he picked up a snowball and threw it at her, hitting her in the back of the neck.’ 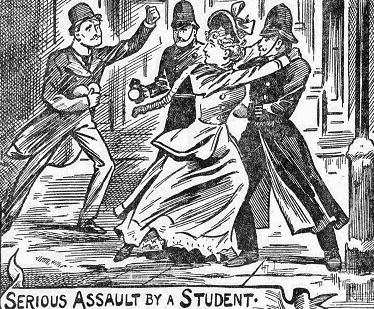 Florence screamed loudly as she ran away. The noise alerted two policemen and Florence fell exhausted into their arms. They challenged Charles who was in hot pursuit, ready and armed with two more snowballs! Charles was very drunk and used ‘vile language’ to Florence, even attempting to assault her in front of PC Davis.
Charles said he couldn’t remember anything about the incident, but ‘if he did anything improper he was very sorry.’ As Charles was clearly well educated and respectable, the magistrate concluded that his sentence could not be less than a 40 shillings fine (about £175 today), whereupon Florence fainted, and had to be carried out of court.