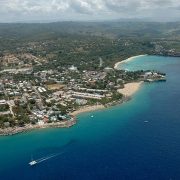 Actor George Rose travelled an unusual path from Bicester to Broadway. He lived in West Hampstead for the best part of a decade while he learned his craft from great actors and directors such as Tyrone Guthrie, Laurence Olivier, Peter Brook and John Gielgud. And after a very successful career on the stage, he died a tragic death in the Caribbean.

George was born in 1920 in the market town of Bicester, 15 miles north of Oxford. The son of a family butcher, he was educated at Oxford High School and went to see plays in the city every week. George left school at 16 to work as a secretary at Oxford University and then tried farming. After serving in the Army during WWII, George studied music at the Royal School of Music where he saw an advert for singers at the Old Vic and joined the company. With a letter of recommendation from Lawrence Olivier he got a one-year acting scholarship at the Central School of Speech and Drama; which was then at the Royal Albert Hall, moving to Swiss Cottage in 1957. Rose worked in Shakespeare at Stratford before joining Peter Brook’s productions at the Haymarket and the Phoenix theatres.

He made his New York debut in the 1946 production of Henry IV, Part 1. He did two further Broadway productions, Much Ado About Nothing (1959), and A Man for All Seasons in 1961, when he moved permanently to New York. Rose became very successful on Broadway and won two Tony awards for his performances in a revival of My Fair Lady (1976) and in The Mystery of Edwin Drood (1986). He was particularly good at comedy roles ranging from Shakespeare to light opera, and in 1981 he appeared in The Pirates of Penzance with Kevin Kline and singer Linda Rondstadt.

Friends loved him for his warmth and eccentricities. Fellow actor Paul Scofield said George had ‘a smile like a big log fire’. In New York, George lived in a flat in Greenwich Village which he shared with a lynx, a mountain lion and other wild animals. His working life was devoted to theatre while his spare time was spent reading, cooking and listening to his collection of 17,000 records.

About 1979, George bought a holiday home in Sosua in the Dominican Republic. Friends warned him about the dangers of living there but he loved the country life as a break from New York. In 1984 he adopted a fourteen-year-old local boy called Juan and in 1986 made him heir to his $2 million estate.

In May 1988, the New York Times reported that George had been killed in a car crash in the Dominican Republic, but the local police soon said it was not an accident. Juan, now 18, his natural father and two other Dominican men confessed to having murdered the actor for fear that Rose had turned his attentions to a younger boy and was about to alter his will. The police said George had been held prisoner for eight hours. The men faked the car crash to try and hide the fact that George was beaten to death. They did not stand trial for the murder, though all but Juan were imprisoned for several years.

A few days before his death George had asked an American friend on the island to take him to see a lawyer as he wanted to change his will as he realised that Juan did not really care for him. But he never made the meeting. In a private settlement after George’s death, the penniless Juan received the house in Sosua, which he promptly sold and then he disappeared. He reappeared on the island in 1997, the year the three men were released from prison.

The Dominican authorities gave out little information about the murder as they wanted to protect the valuable tourist industry. This meant George’s friends and family were unaware of the details of his death for some time.

In June 1988, 800 people gathered in New York’s Shubert Theatre to celebrate George Rose’s life in a memorial service. Theatre producer Joe Papp referred to him as a Broadway legend. Henry Fonda once described his artistry as a marvel, and Jack Lemmon said Rose’s performances had given him the most pleasure in theatre. Cleo Laine, who appeared with him in Edwin Drood, recalled his singing and encyclopaedic knowledge of music. Lynn Redgrave said he taught her everything she knew about playing comedy and was the first person she phoned when she arrived in New York. In 1964, after George stole the grave scene from Richard Burton when they played together in Hamlet, Burton humorously said ‘Never share the stage with animals, children or George Rose’.

George Rose also appeared in more than 30 films – his IMDb entry lists 76 performances in film and TV between 1952 and 1988, and this does not include his many stage performances. Alix Kirsta wrote a very good article about Rose in the Sunday Times on 25 May 1997 which is available (along with many photos) on her website.

There was revived interest in Rose in January 2016, when Ed Dixon wrote and starred in a one man play Georgie: My Adventures with George Rose, which was performed in small theatres in New York. Dixon said he wanted to take the audience on his personal journey. In 1973, Ed had met and become friends with George who was 30 years older, when they toured together in The Student Prince. Dixon said, ‘He was famous and gay, powerful and gay, rich and gay. People couldn’t say no to George. His personality was overwhelming’. Dixon was in awe of Rose and the first hour of the play looked at his career with anecdotes and impressions of famous actors such as Laurence Olivier and Katharine Hepburn. In the last half hour Dixon tells how George had invited him to Sosua. Here, Ed said he felt uncomfortable with the young men at the house and he returned to New York. A short time later he heard about George’s death, and he was stunned and horrified as he learned the truth about his friend, mentor and idol.