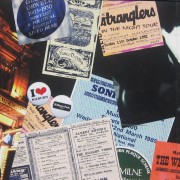 Francesca Baker, music blogger, promoter and recent arrival in West Hampstead, takes a look at why our local area isn’t as buzzing as it could be when it comes to live music.

Music. NW6. The two aren’t generally associated, but is that fair? We’ve already revealed West Hampstead and Kilburn‘s musical legacy and the impressive list of bands who’ve tuned up and rocked out in the area: The Rolling Stones, Jimi Hendrix, The Beatles, Cream, U2, Joy Division, The Smiths, Nirvana, Blur, Suede – even Adele!

Anyone who’s recently walked past the billboards on their way to Kilburn Park station will see the vintage ticket stubs and posters that are testament to a once buzzing music scene. Where is it now, and can it be revived?

Music culture and creativity does continue in the area. Bands play in Kilburn most nights, there’s regularly jazz of various hues on West End Lane, Folkies, an ‘Aladdin’s cave of musical instruments’ does a roaring trade (for an independent store) and, of course, the Institute of Contemporary Music Performance attracts talented musicians to study on its many courses.

So far, so fertile. But a bunch of sporadic gigs doesn’t make a thriving humming music scene. Do West Hampstead and Kilburn have what it takes to be uttered in the same breath as Camden Town or Shoreditch when it comes to London music?

My generation
A music scene implies a community, a group, a shared feeling. This all helps generate the “longevity and consistency” that Simon Whiteside, local jazz musician, believes creates a scene. Ultimately, it is people – the right people – not history.

Matt Churchill, another musician who’s cut his teeth at local venues, thinks that the culture can transform quickly if the right mix of passionate people are there. This is what has driven the success of places such as Walthamstow, with its thriving art trail and mini festival Stowfest. It proves that a lot can happen when like minded people “start making some noise…and people who are interested start paying attention.”

I used to live in Ealing and, fed up of getting the night bus back home from central London and constantly bemoaning the lack of gigs closer to home, I decided to put on my own nights in a local pub. Lo and behold, I was not the only music lover in the area. A lack of music doesn’t mean there’s no demand; more likely it means the demand isn’t being heard or acted on.

Everyone wants to be in a gang and once something starts to develop it often spirals driven by the excited members’ willingness to spread the word, entice new people, and welcome them in.

You can’t always get what you want
A cursory glance at listings reveals alarmingly few gigs in the area. A prerequisite for a thriving music scene must be a range of good quality venues in which to perform (and rehearse).

There are venues of course. The Good Ship, which opened in 2005, delivers quality acts almost every night and attracts people from across London. Owner John McCooke asks that all Londoners ‘consider us an extension of your front room with a jukebox in,’ which in many ways is exactly what a venue should be: comforting and creative. The Good Ship has managed to attract a regular crowd due to its consistency, but this sort of thing does take time – and commitment

Carnegie Hall was real fabulous, but you know, it ain’t as big as the Grand Ole Opry.

Across Kilburn High Road is Powers, a smaller and darker venue-cum-bar owned by music impresario Vince Power but run by his son Patrick. Down the other end of the road there’s Love & Liquor, which has garnered attention for having Idris Elba (aka “Stringer Bell” aka “Luther”) as a guest DJ.

Up in West Hampstead the focus is more on jazz than ‘boys with guitars’, but it’s still individual venues doing their own thing rather than any sense of collaboration to drive the music scene. A jazz festival is in the offing, which might help unite the venues – most of which are cafés, bars or restaurants rather than dedicated gig venues.

Crosstown traffic
There are more than 60 live music venues across Camden, but the majority are in Camden Town and Kentish Town. Both have the larger venues that attract big-name bands, such as The Roundhouse or Koko. Is our part of London too far from Camden Town to pick up from its gravitational pull; yet too close to compete?

If you’re not a new-music addict, it is easier to go and see a well-known band than take a risk on a new and upcoming artist in a local pub. By the same token, bands and artists are more likely to gravitate towards bigger venues with a solid reputation rather than magnanimously attempt to kickstart a new scene. If it’s a choice between the chance of bumping into A&R in the Old Blue Last or Shackelwell Arms or playing a small gig to friends and family on a rainy Tuesday in Kilburn, well… need I go on?

Come together
The ease with which music can spread across the world means that local scenes don’t have time to develop like they used to. It is possible for bands to succeed without playing local gigs, and the allure of working hard to build a local following fades when challenged by the glamour and allure of a worldwide audience. The venues meanwhile find it hard to make much of a profit, and this means that the people involved generally have to be doing it for the love rather than for a lucrative return.

A venue that built a reputation as a high-quality (if eccentric) bastion of the independent music scene was The Luminaire in Kilburn. Yet, despite all its credibility and big-name acts, the owners closed it in 2010 as it became harder to meet their financial obligations.  If such a successful venue still couldn’t be profitable enough to survive then what hope is there?

Perhaps the answer lies in alternative uses of space. The Albert in Queen’s Park is a pop-up creativity hub that runs music and arts events, and there are some lovely alternative venues in West Hampstead itself, such as The Wet Fish Café, Brioche or La Brocca.

A scene requires a network of people – fans – beyond the musicians and the venues. There needs to be a buzz. The Good Ship’s heavy use of social media to spread the word means it is well known in the music world, but McCooke believes that Brent Council should do more to help to encourage the scene to thrive in the community. He says that there is, for example, no night time culture featured in the Brent Magazine.

A support network could mean radio stations such as Shoreditch Radio, or a large student population. Local blogs, radio stations, and dedicated music media are all necessary to keep enthusiasm bubbling for longer than one night. Support and exposure are the real drivers, whilst passion, and a genuine belief in an area’s potential, can ensure longevity.

Kilburn’s Institute of Contemporary Music Performance attracts and turns out quality musicians. It was once home to The Vaccines, Daughter, and The Robbie Boyd Band. But, according to its Industry Liaison Officer Giaco Bridgett, it too is “crying out for somewhere that has great production, cool nights and attracts cutting edge talent to the area.” We come back to the venues.

Where the streets have no name
Sometimes, it’s only after a few bands have emerged that a music scene is defined. The Happy Mondays were famously ignored in Manchester until ‘Madchester’ was coined. The Manchester scene was far more than a marketing ploy, but perhaps building a Kilburn Crawl or Whamp & Blues nights might get the ball rolling. Perhaps.

There’s enough activity bubbling along to suggest there is potential for a thriving music scene here, but the challenges that face music across the country are always exacerbated in London with high rents and stiff competition. The situation is, in the words of McCooke, by ‘no means terminal’, but it’s certainly in need of some love and attention, some great venues, and some excited people. Is that you?