Lots of you will have noticed that the new Thameslink station on Iverson Road is nearing completion. So, I thought it would be worth clarifying what’s going to happen over the next few months as the station transitions from the northern to the southern entrance. Handily, Thameslink have produced a useful guide to just this.

On November 14th, the existing station closes temporarily as work begins on a new ticket gate. This means passengers will have to enter the station by the side of the new station in Iverson Road. This will coincide with the work site hoardings along Iverson Road being pushed back to create a much wider pavement, although not yet to the full width we’ll see when the project is complete. 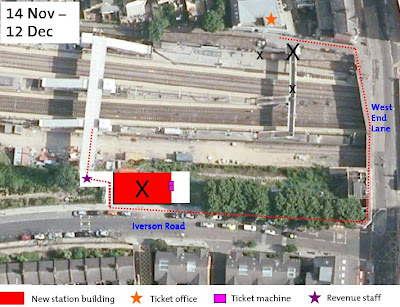 The new entrance will lead on to the new footbridge, although the old footbridge will stay open to allow people to change between platforms 2/3 and 4, but the stairs from platform 1 will be closed because the work for the new ticket gate enclosure will straddle the top of that staircase. The lifts on the new footbridge won’t be working until the new station building is complete in December.

Closing the existing entrance will mean today’s ticket office will be separated from the station. However, there will be two ticket machines at the Iverson Road entrance and staff will be available during normal ticket office hours with portable machines to sell people the full range of tickets. 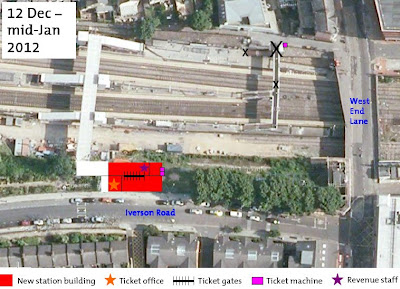 In mid-January the new ticket barriers will open above platform 1, and the original entrance will re-open. So, the station will have two permanent entrances and exits, and work will be complete. There will be a new ticket machine at the existing entrance and two machines at the new station building. 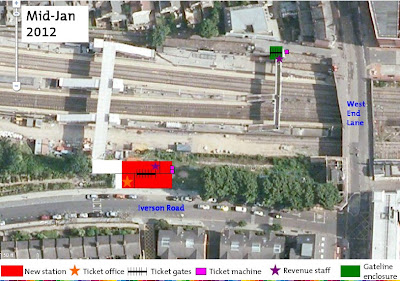 The ticket office hours will remain the same as today – 0615-1930 Mon-Fri; 0645-2000 Saturday and 0740-1715 Sunday. Outside these hours, people will access the platforms via the night entrance alongside the building, which will also be the temporary entrance from November 14th to December 12th.

There will be two touch-in/touch-out Oyster card readers at the Iverson Road night entrance, as well as Oyster readers on the new permanent ticket gates inside the station and at the existing entrance once the ticket gate enclosure there is complete.

Bin there, dump that The Wet Fish Café under the microscope