While the tabloid press has been hauled over the coals, and Curiosity disappears off to Mars, it’s been a fairly quiet week in West Hampstead – but there are quite a few things coming up over the next few days.

A suspect has been arrested and is being held on remand in connection with eight recent burglaries in the South Hampstead conservation area. The local SNT is also warning people not to leave garden tools lying around in the communal gardens, as some are being used to gain access.

Jedward were spotted in Cricklewood.

A new sign has gone up at Vini Vivi on Mill Lane and the refurb of the dentists also includes a rebrand and sparkly sign.

Tom checked out West End Lane newcomer Costello, while another local posted a review of Ladudu (site of December’s whampreview).

Coming up
On Monday, La Brioche hosts the Return of the Short Story, and on Friday, the owner’s band will be playing.

Tuesday is West End Lane Books’ Christmas bonanza day with 20% discount on all titles, mulled wine and other Christmas treats from 9am (bit early for mulled wine?) to 6pm.

On Thursday, The Winch is inviting people to come and hear abouts its exciting plans for the future. Definitely worth attending.

There’s a cookbook sale at Kitchen Table on Dec 4th, donations of your books very much welcome.

Photo of the Week
You really can never be too careful in Kilburn, as this photo by @CodinginLondon of an innovative bike locking device shows: 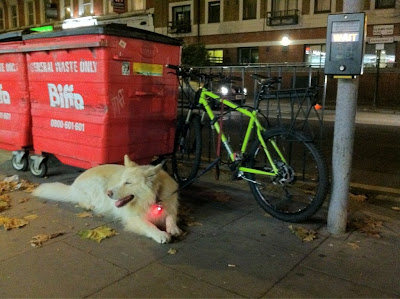 What have I missed since November 28th?