More chaos on the Jubilee Line as one of the new Jubilee-liveried trains broke down and people had to walk down the tracks.

A list from our local ward councillors of some local events this summer.

Crime rates in all categories are down in Swiss Cottage ward.

Local historians Dick Weindling and Marianne Colloms launched a new website and have some new books coming out soon.

Was there paranormal activity in West Hampstead back in the 1950s?

The Tricycle’s screening of the Woody Allen documentary is this week’s Film of the Week.

Whampgather IX will be June 24th – apologies that details aren’t quite finalised yet; any day now! Newsletter subscribers will be the first to hear, and there are just 50 places this time.

I’ve now heard the butcher is definitely not opening on West End Lane as planned, but is still looking into other West Hampstead opportunities.

Photo of the Week goes to @AdamJWilson for this well-timed snap of (dis)mounted police in Fortune Green. 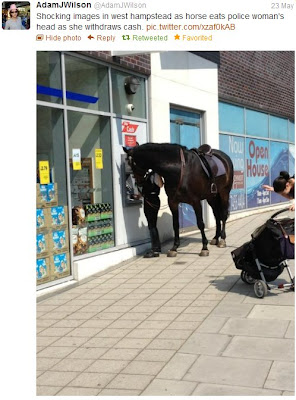 Is this Virgin suicide? Camden Town and Kentish Town: Then and Now