Monday, August 15th 2022
The comedian Harry Weldon is buried in Hampstead Cemetery, Fortune Green Road, in a grave close to other music hall performers: the famous Marie Lloyd, and the husband and wife act called ‘This and That’: James and Clarice Tate. Co-incidentally, it was said that that as a young man, Harry got the idea of going on the stage when he delivered a bouquet to Marie Lloyd.
Harry was born James Henry Stanley in Liverpool on 1 February 1882. He worked as a clerk in a shipping office and next as a florist’s assistant while performing as an amateur. His first professional engagement was as a member of a touring group run by the wonderfully named ‘Professor Hairpins’. It wasn’t very successful and Harry often had no money: ‘It was sometimes necessary to leave the landlady at short notice and without paying. I used to write their names on the backs of bills and send on the money when I could.’
Harry’s first stage appearance was at the Tivoli Music Hall, Barrow, in March 1900. He proved so popular that by November 1901, he was appearing at the Marylebone Music Hall in London. He developed his act using a prolonged whistle to accentuate the letter ‘S’, which became his much imitated trade mark: ‘Sno use’ became a classic expression. He was also known for his ‘clean’ jokes and routines. ‘Stiffy, the Goal-Keeper’; ‘The White Hope’ and ‘Bronzo, the Bull Fighter’ are among his best known sketches. Another character he developed was ‘Dick Turpentine’, a comedic take on the well known highwayman, you can see a cartoon of him at:
http://collections.vam.ac.uk/item/O85165/caricature-cooke-george/
In 1907 Harry was in Fred Karno’s company when he was first cast as ‘Stiffy’ in ‘The Football Match’ routine. Two different stories are told about this sketch, but both feature a young unknown by the name of Charlie Chaplin, then working for Karno on a meagre salary of 35 shillings a week. In the first version, Charlie is Harry’s understudy and he almost collapses from fright when he has to go on at a moment’s notice. Harry was supposed to have said of Chaplin, ‘he was so stiff he left ‘em cold, but he was one of the most unassuming and kindly fellows that one could meet.’ The other recalls Charlie playing the villain who tries to persuade Stiffy to ‘throw’ the match, offering him huge amounts of whisky which the goalie refers to as ‘training oil’. Whichever is correct, a recent biography of Chaplin claims Charlie was by far the better comedian and upstaged Harry, who far from praising him, never forgave him. 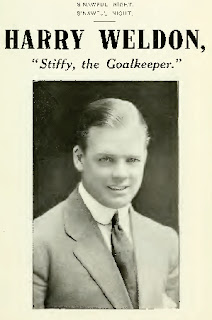 Starter for 10 What have I missed since June 18th?