The local Neighbourhood Development Forum (which is now on Twitter by the way), held its latest meeting last week. I just perused the minutes and was intrigued by a paradox of democracy. 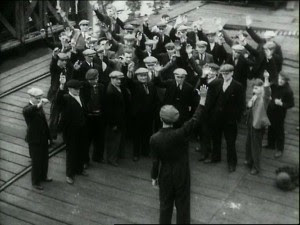 The NDF has to determine the precise boundaries for its local plan. Ward boundaries are not necessarily the solution, but at the moment they’re the easiest option and the NDF covers West Hampstead and Fortune Green wards. This means that, for example, Broadhurst Gardens is not covered because it’s in Swiss Cottage ward.

According to the minutes of September’s NDF meeting, WHGARA – the residents association for the streets between Lowfield Road, West End Lane, Hemstal and Sherriff Roads – has not yet decided whether to support the Forum, but would make its decision on October 9th. I have discussed before the psychological and physical divide felt by some, but not all, residents who live south of the tube line between them and the rest of West Hampstead.

NDF members said they thought it would be hard for WHGARA to express its views on the development of the area, particularly the Interchange, if they excluded themselves from the Forum; WHGARA’s representative said she “thought the Forum was pro-development and didn’t have much support in the south of the West Hampstead area.”

James Earl, the NDF chair, said that if WHGARA decided not to support the Forum, the southern boundary would probably move north to be the railway line.

This raises a couple of issues. First, I’d like to see the evidence of the support or lack of for the Forum in the WHGARA area. My unproven hunch is that most people have probably never heard of it, let alone have a view on it. Second, although I accept that residents assocations generally represent their area, they are not necessarily representative of an area, so to my mind it seems odd that if an RA chooses not to support an initiative, this automatically means that area is excluded.

But this is not the paradox.

Keep walking with me.

Later, the minutes explain that the October 22nd NDF meeting will be open to the public and run in conjunction with WHAT. “Members said it was important to invite and involve more people than ‘the usual suspects’. There was a desire for publicity to be at the new farmers’ market; in shops and local businesses; and at other public events. Suggestions for poster locations also included on trees; doctors’ surgeries; schools; nurseries; community centres; parks; and cafes.”

Excellent – I wholeheartedly approve, and you can be sure I’ll mention it on here too. Now we come to the paradox. You live in the WHGARA area, but have never heard of it- or it’s not your thing perhaps. You’re browing the cauliflowers at the farmers’ market when you notice a flyer for a public meeting about shaping the future of West Hampstead. This sounds more interesting. You toddle along, but then find all too quickly that it will have no bearing on your immediate streetscape because some people you don’t know have decided not to support it.

Moving beyond the usual suspects is surely the right thing to do – the process should be open to as many people as are interested. So why then, is something as important as the boundaries for the whole plan dependent on the powers that be at WHGARA? More bluntly: what sort of majority off what sort of turnout is needed at a WHGARA meeting to determine whether it’s a yay or a nay? Do leave a comment if you know the answer to this question.

I would urge the NDF to stick to its guns and use the two ward boundaries as the basis for the plan. Even though I don’t think it’s perfect, I remain unconvinved that the lack of support of a residents association (should that be the eventual outcome) is enough reason to shrink the size of the area.

And there’s the paradox. Democracy should be about opening up decision making to the people, but it’s also pragmatically about electing decision-makers and abiding by their rules. Yet at this hyperlocal scale, the two seem to have the potential to clash.

You can stop walking now.

Is Mill Apartments £15,000 sweetener enough? Stand By Me on Fortune Green