Earlier in the summer, Camden held a consultation about parking in the borough, specifically around the Controlled Parking Zones (CPZs). The findings have been published, so what changes should we expect in West Hampstead and neighbouring areas?

The scope of the consultation was to “gauge opinion on issues relating to the size, days and hours of control of controlled parking zones (CPZs) as well as on the maximum hours of stay in pay and display bays.” It was not a consultation exercise asking for views about specific proposed changes, which will be dealt separately, it was more to test the water. 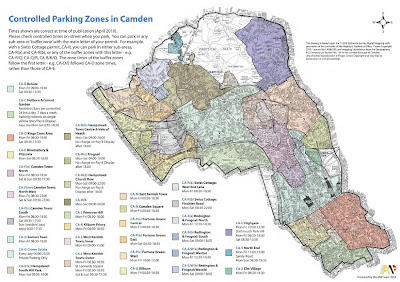 First up, size. Most respondents generally thought the CPZs were the right size so there are no plans to review this further.

Residents in zone CA-P, which covers a large part of West Hampstead and Fortune Green, generally believed the weekday hours were too short and there was some interest in extending/introducing Saturday and Sunday controls, particularly in CA-P(c) )(the north-western reaches of Fortune Green

Opinion was equally split on whether the existing pay and display arrangements were suitable borough-wide. Camden’s conclusion is that there is scope to look at specific arrangements in some areas with a view to simplifying arrangements, such as changing bays with a 3-hour maximum stay to 2 or 4 hours).

Any changes to parking arrangements in Fortune Green would not happen until 2013/14.

Because one market’s never enough 65-67 Maygrove Road: investing in Sidings