Another year, and lots more West Hampstead locals have met each other at the various events we’ve organised. It very much feels that this year, the events have moved well beyond a collection of tweeters and have become more – dare I say it – mainstream. And that’s no bad thing at all. 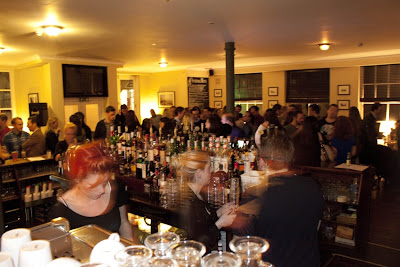 Way back in January, we held Whampgather VIII at The Priory Tavern. More than 100 people turned up, making it the biggest yet. We had live music for the first time (though we perhaps should have done a soundcheck) but best of all we raised more than £500 for The Winch through the raffle. The bar had been set high for future events.

We followed up immediately with the second bookshop “lock-in” at West End Lane Books. On a cold night, a literary crowd of locals turned up for some free wine, discounts and lively conversation. We ran the night again in August with quite a lot more people and there should be another one coming up in the New Year.

In March, whampreview turned its attention to Little Bay. This was the biggest headache whampreview I’d attempted with 32 of us taking over the conservatory of the Belsize Road restaurant. Lots of new people came along, which is always great to see. Once we’d got used to having red pepper sauce served with everything, the evening became very enjoyable indeed.

April saw 24 of us at Guglee on West End Lane, only in its third month of operating. Sachin and his staff looked after us extremely well and the Sev Puri Chat provided quite the ice breaker. If you haven’t tried them yet, i’ll just say that you need to tackle them in one mouthful.

If anyone needed some good ice breakers it was the 30 lovewhampers who bravely signed up to the first ever singles night, organised by Katie. After being carefully matched up based on complex algorithms and a rigorous questionnaire (cough), our 15 couples headed off to various local restaurants to see if love was in the air. It wasn’t for most, but there were a couple of couples who didn’t return – and at least one walk of shame the next morning. So, that’s a result right? Think we might be doing this again in 2013.

The final whampreview before the summer break was our poshest yet. Just 16 of us trotted down Abbey Road to One Blenheim Terrace. Lots of new faces again, and some excellent food if slightly slow service.

In June we held the summer #whampgather. In keeping with previous years, this was a daytime family-friendly affair that rode on the coattails of the Team Sunday Lunch adventures earlier in the year. Fifty of us filled up the front of the pub to enjoy the various roast offerings of the revamped pub. There was some torrential rain that lunchtime, so many new people had to introduce themselves while pretending they liked looking like drowned rats.

The awful weather in the first part of the summer meant we feared the worst for the second WHampBBQ. In 2011, we’d ended up choosing the hottest day of the year. That seemed like a distant hope in 2012. Yet, astonishingly. the Gods of the Grill shined down on us and in late July more than 60 people descended on Chris’s lovely flat on a warm sunny Sunday for more meat, salad and Pimms action than NW6 has seen since.. well, since the same time last year. 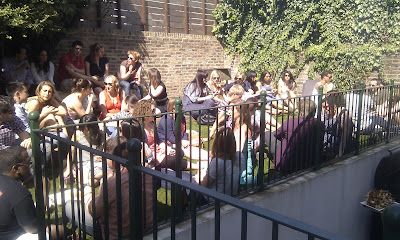 We actually held two events in July as it was our first Whampfilm night at the Odeon in Swiss Cottage. We managed to get 27 tickets for the opening night of the Dark Knight Rises at the Imax screen (and get a glass of wine thrown into the bargain). There were a few logistical problems, which we were able to learn from when we had the second film night for Skyfall in October.
It wasn’t technically a whampevent, but I was heavily involved in promoting yet another event in July when the Friends of Fortune Green held their first ever outdoor film screening. This had been postponed a couple of times already due to the weather, but finally a large crowd of around 200 people came to watch Breaking Away and get bitten to smithereens by mosquitoes. A second screening was held in late September and the FoFG hopes to get this up and running again in 2013.

Aside from the Bond night, October was quiet, but we were saving ourselves for November. First up was Whampsushi at Feng Sushi. This was a whampreview with a difference as we took over the whole restaurant for a special set menu devised by co-founder and managing director Silla Bjerrum. Silla was also on hand to give us some sushi demonstrations. Given all the clamouring there’s been over recent years for sushi events, this had proved a surprisingly hard sell, but the night itself was really excellent – both the food and atmosphere lived up to billing. It was also sadly the first time we had no-shows for a whampreview – hopefully the last, as it messes up table arrangements, deprives people of a place, and screws the restaurant.

A week later was the biggest event of the year. No, not the Olympics. No, not the Jubilee. No, not the Leveson enquiry. Bigger than all of those. Whampgather X. We changed locations (we’re running out of large enough pubs) and took over The Alliance for the night. In total, 160 people turned up – lots and lots of new people alongside the familiar faces. It was a great night, and lovely to see DJ Stoney providing the music. He had been at the very first whampgather back in October 2009, when I’d thought that perhaps if it went well I might do a second. Christmas drinks were relatively informal again this year, but it was nice to raise a glass with all those who turned up.

Twelve months of events – thank you to everyone who came along to any of them. A special thank you to my able helpers: particularly Tom, Mark, Nicky, Lauren, Jen, Brad and Katie. Thank you also to all the businesses who have donated raffle prizes or worked with us to offer good deals at events. It’s all much appreciated and I hope that locals reciprocate with their custom.

If you’ve never been to a whampevent but think that you might want to meet some friendly locals, then do sign up. They sell out quickly, and the restaurant events are always oversubscribed so don’t be disheartened if it takes a couple of attempts to come along to one. In 2013 I’m going to try and organise more whampreviews, there’s a monthly film club starting very soon, lovewhamp should return, and of course Whampgather XI is already looming on the horizon!

I’m going to give the last word to @tommyjames, who tweeted the morning after Whampgather X: “I went along to #whampgather on my own, took a risk and made some friends.”

That’s what it’s all about.

See you next year.

“I had an absolutely brilliant time.” Get the scoop on Whampsocial