Update Oct 16th: 3.30pm: Whampgather has sold out. There is no waiting list, but depending on cancellations nearer the time I hope to be able to release a few more tickets. So keep your eyes peeled on Twitter. 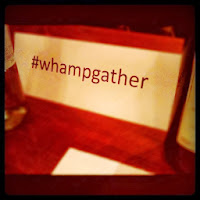 It’s been a strange year – there’s only been one whampgather. Back in March, 160 people squeezed into The Alliance and partied like it was 1999 (or 1989 judging by some of the music). After a summer hiatus, it’s time to get your mingle on, your party gear out, and your drinking elbow oiled. Whampgather is back. Read on for everything you need to know or, if you’re a #whampgather devotee, get your ticket right now.

The lovely people at The Gallery have agreed that #whampgather has reached such levels of importance that they’re willing to close on a Thursday night just for us.

Yes, we have exclusive use of the coolest bar in town, making this the party of the year. Details are still being ironed out, but all you need to know is that there’ll be music, there’ll be drinks and you’ll even be able to buy some food (come early if you want food, it might get crowded later). There will also be The Raffle, raising money for The Winch and with (I hope) amazing prizes.

What’s that? You’ve absolutely no idea what I’m talking about? Read this overview. In a nutshell, it’s a big party open to all ages (18s and over), and is an amazingly good way to meet some locals. We’re up to number 12, so we must be doing something right.

The Gallery has more capacity than I thought, so hopefully you can all come but YOU WILL NEED A TICKET (see below). Tickets are free (yay), but do tend to sell out (boo), so I suggest you register pronto.

But I won’t know anyone? That’s sort of the point. With so many people there’s bound to be someone you’ll get on with. I know it can seem as if lots of people already know each other, but we all met at events like this. Everyone’s been a whampgather virgin at some stage – people are very welcoming and friendly so just dive in and say hi.