The rental market in January has been very mixed. There are lots of deals being done at the entry level, with cheaper flats being snapped up fast,but at the top end asking prices are being clipped.

Demand for properties has been strong in January but we are also seeing more properties coming onto the market, which might start to balance supply and demand. We know from experience that applicants will come if you have the right properties, and an increase in supply leads to a higher volume of applicant enquiries. We are getting plenty of enquiries from potential landlords and we’re valuing several new properties each day.

In an area like West Hampstead there are lots of excellent applicants out there but, as we started to see towards the end of 2013, tenants are looking for value for money. The rental demographic has shifted and high calibre applicants are looking to rent for the long term. Their wants and needs have changed and this leads into what we discussed in our last property news; that landlords need to invest in the product if they want to attract and maintain quality tenants.

Looking to the future

Encouraging landlords to invest in their product is a start, but in order for this to be a success for both tenants and landlords they need to fit the right demographic to the product. Last year we ran a series of polls through our West Hampstead Life articles, and your feedback prompted us to ask more questions in order to understand what people want when renting a property.

We’re currently running a short survey to understand what people want when they rent a property. If you are currently renting or are looking to rent in the future, please take three minutes to complete the survey. You’ll get the chance to leave your email address at the end to win £250 John Lewis vouchers, and we’ll share the data in our May Property News blog for West Hampstead Life.

This week on Twitter the issue of local housing stock was raised. In light of this I was interested to read a recent Centre for Cities outlook that looked at housing stock and prices together to provide a useful insight into a city’s housing market.

London features within the top 10 cities with the highest housing stock growth, coming in at 9th place. Additionally among the top-placed cities, only five (Swindon, Milton Keynes, Gloucester, London, Peterborough) have experienced housing supply growth in accordance to their population growth rate.

In December 2013, rent in London increased by 1.6% compared with the same month a year before, compared to an increase in the rest of England of 0.7%. Although the London property market flourishes in comparison to the rest of the UK, rents across London boroughs vary dramatically. I thought it would be interesting to break the average private rent levels down further and compare average private rent prices increases in Camden compared to London as a whole and the neighbouring boroughs of Brent and Islington. 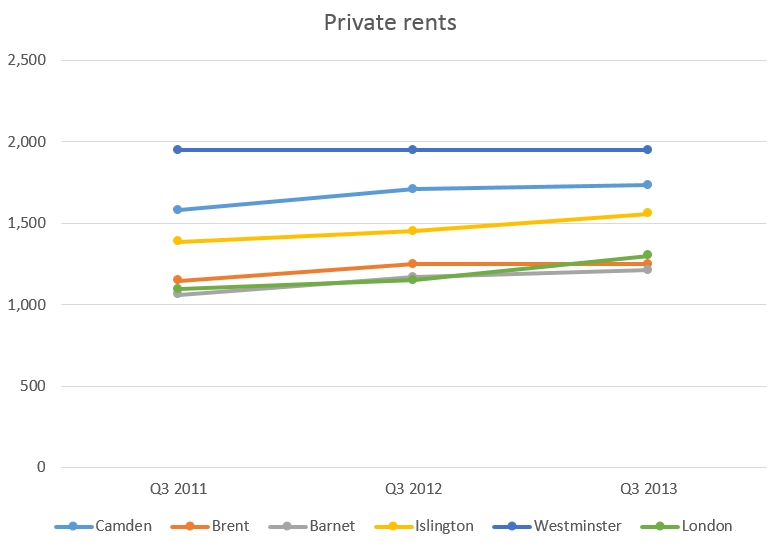 Private rent increases in the neighbouring boroughs of Brent and Islington were higher than Camden over the same time period, seeing increases of 3.68% and 7.44% respectively.

Rents aren’t rising as fast as they once were because rental yields in London are almost insignificant compared to capital appreciation. Previously landlords wanted an investment vehicle that guaranteed them at least a 5% yield, but capital appreciation provides more value than any yield.

The importance of a good team

Towards the end of last year I started to think about what the New Year could throw at us, and I quickly found out. In December I underwent major back surgery following three very uncomfortable months. Thankfully I had time to prepare the lettings team to ensure everything ran smoothly in my absence, but in the first week of January our ever popular negotiator Dominic Moyes broke his ankle and is still unable to work. It’s been a big challenge not having him around but it’s shown me the importance of having a good team around you.

Having two senior members of staff recovering isn’t ideal for any business, but last year we worked hard to build an exceptional team and the internal restructure that took place meant the business was capable of dealing with this unfortunate ripple. Ten members of the lettings team are individually ARLA qualified and most have experience in different areas of the business. Having knowledgeable and experienced staff able to step up successfully into different roles has been fantastic to watch and I’m excited for the year ahead!

Don’t forget to enter our #WhampPlanet competition! Collect your free West Hampstead bag from Paramount, tweet a picture of it on your holidays to @west_hampstead and you could win vouchers and prizes from West End Lane Books. West Hampstead bags have already made an appearance in Antarctica, Argentina and New York – where will it end up next?!

Property News: Renters are people too

What have I missed since January 27th?