David Devant, one of the world’s greatest illusionists, lived at 2 Belsize Road from 1899 to 1911 although his blue plaque is at Number 1 Ornan Mansions on the corner of Haverstock Hill (now called Ornan Court). 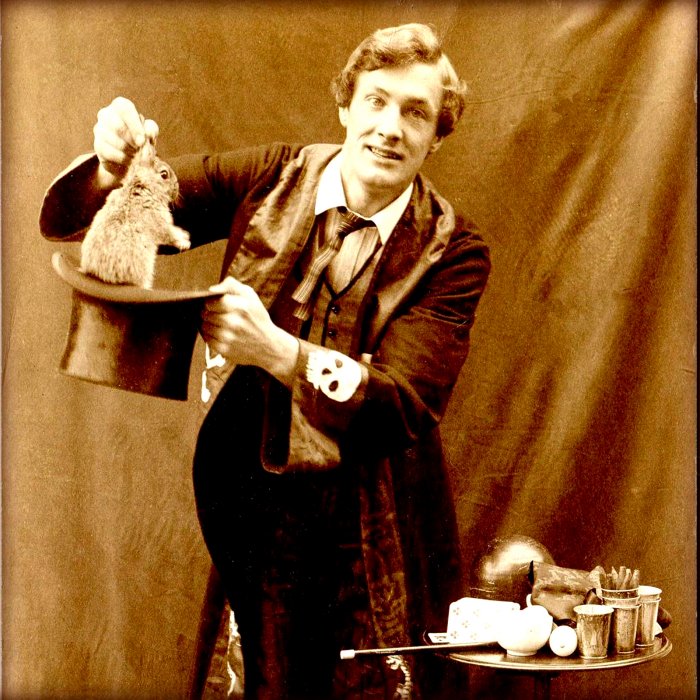 David Devant pulling a rabbit from the hat

He was born as David Edmonstone Wighton on 22 February 1868, at 4 Boston Terrace, opposite the Boston Arms pub in Junction Road, Holloway, the eldest of James Wighton’s seven children. James, a Scottish artist, painted for the Illustrated London News and other magazines, using the family as models, but he wasn’t well paid and the family struggled. They moved several times around north London. As a boy, David was entranced watching magicians perform and he decided this was what he wanted to do. But before he could realise his ambition, he had to earn a living.

After school David began work as a pageboy for a middle class family in Bartholomew Road, Kentish Town. Aged twelve, he polished shoes and cleaned the house. His next job was selling fruit and chocolate in Euston Station, but he was sacked when he was discovered practising conjuring tricks instead of working. Then he worked as telephone operator in the City and a gas lighting salesman.

All the time he practiced conjuring, spending any spare money on magic books and tricks. When he visited an art gallery and saw a French biblical painting called ‘David devant Goliath’ he thought this would be a good stage name, not realising that ‘devant’ meant ‘in front of’.

In 1883 David was very impressed when he saw the Maskelyne and Cooke’s magic shows at the Egyptian Hall in Piccadilly. He did not know that ten years later he would top the bill there.

He began giving shows at parties and his first public performance was at a bazaar held in a schoolroom in Kentish Town Road. Several professional magicians were in the audience and they were impressed by the young David Devant. Encouraged, he advertised his magic shows and hired a local hall.

One of his best tricks was the Vanishing Lady. He asked two women in the street if they would help him. Surprisingly, they agreed and became his assistants. The trick worked very well: one woman partnered Devant while the other concealed herself in the gallery. When Devant pulled a cloth off the women seated on the stage, she disappeared, only to miraculously ‘re-appear’ in the gallery. But one night it all went badly wrong. When he pulled the cloth away his assistant on stage refused to disappear, but the second woman did her part and appeared in the gallery! Quickly the curtain was brought down. Devant later discovered the two women had fallen out over a box of chocolates sent by an admirer!

David made his music hall debut at the Albert Palace near Battersea Park in 1886. His act went down well with audiences and he began to perform around the country. In his autobiography My Magic Life, he says that in about 1888, in Margate, he met Annie Marion Gosling who used the stage name Marion Melville, and they were married three weeks later. But it seems they just lived together as there’s no record of their marriage until 1904 when their daughter Vida was born. Marion worked as Devant’s assistant. 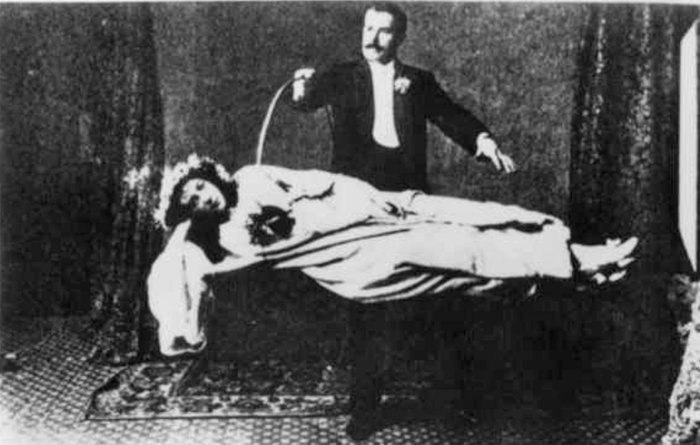 In 1891, Devant made his first appearance at the London Palladium and the Oxford Theatre. But he was sacked from the Oxford when he dropped a rabbit during his act. The manager used the mistake as an excuse to get rid of Devant, as he had booked another conjuror. Devant lost six months of work.

In 1893 John Maskelyne asked Devant to appear at the Eygptian Hall. This was his big break and the men later became partners as Masklelyne and Devant. Devant took over the running of the hall and organised tours around the country. He was fascinated by cinematography and bought a projection machine from R.W. Paul, becoming the first independent operator in Britain with shows at the Egyptian Hall and three touring companies. In 1904 the hall closed and they moved to St George’s Hall, Oxford Circus.

Devant devised many original illusions. One of his favourite tricks was the Magic Kettle, which produced any drink the audience chose. In The Artists Dream (1893), a portrait of a young woman comes to life. The woman was his wife Marion Melville. The Sylph has a person floating in mid-air while Devant passes a hoop all the way round to show they’re not being held up by wires. In the Mascot Moth (1905), a woman dressed as a moth appears to dissolve and then disappear as he comes near her with a lighted candle.

Devant became the first President of the Magic Circle when it was formed in 1905. By 1912 he was a world famous illusionist and was chosen to represent magicians at the first Royal Command Performance before King George V in the Palace Theatre. He appeared with his young daughter Vida and Maskelyne’s grandson, Jasper. Devant borrowed a bowler hat from a member of the audience and began producing eggs from it. The eggs were passed to Vida and then to Jasper, but as Devant produced them faster and faster, Jasper started dropped them on the stage, proving they were real. The floor around him quickly became covered in broken eggs and the show was held up as the stage hands cleaned up the mess. 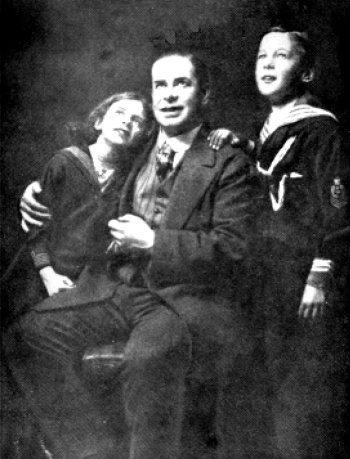 When he appeared in Manchester in 1919, Devant asked a boy from the audience to come on stage and copy everything that he did. He was puzzled when the boy started shaking a handkerchief he’d been given, until he looked down at his own hand and saw it was shaking. This was the first stage of a nervous palsy which got progressively worse and forced Devant to retire in 1920. He continued to write articles and magic books until 1937, when he was admitted to the Royal Hospital for Incurables in Putney. He was suffering from Parkinson’s disease and died in October 1941 aged 73. The Times obituary says he was the foremost magician of his time.

In Devant’s time, Belsize Road joined Finchley Road and Swiss Cottage Station was on the corner. Number 2 Belsize Road was a large house behind the station. It was destroyed by a German bomb on 12 November 1940, that killed one of the occupants. Other properties were also damaged. The area was rebuilt in 1956 as the Harben Estate and Belsize Road was slightly re-routed.

What have I missed since February 2nd?