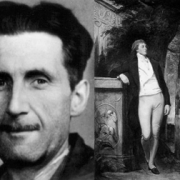 It’s been a long time coming, but Ballymore has finally announced the names of its tower blocks, following the competition West Hampstead Life ran back in August.

Only the first five blocks have been named so far and Ballymore hasn’t decided which name will go with which block. I’m told that the two rear blocks (which contain the affordable housing component of the development) will be named in line with the others though they’re still deciding on those names.

Ballymore has chosen authors with local connections as the theme, and the winner of the competition is Ed Fordham, who suggested three of the five names and was, coincidentally, also one of the original agitators for the names to be chosen in this way. All submissions were sent to Ballymore anonymously however.

The first five blocks will be called Hardy, Orwell, Beckford, Lessing and Milne.

All five authors lived at one time or another (and for varying lengths of time!) in West Hampstead.

And here’s the Nobel prize-winning Doris Lessing in 1975. Lessing died in November last year having lived in West Hampstead for some 25 years.

More than 50 people submitted offical suggestions for the seven blocks with varying degrees of seriousness. More people left comments on the original article (including one who got most of the names that won). I won’t list all the entries, but here are a selection of the thoughtful, amusing and cheeky.

Classical references were popular: Seven wonders of the world, seven against Thebes (niche), and the seven hills of Rome.

The developers had said that “Connections” was their keyword in marketing, and some played on the transport links both at home and abroad

No-one would be surprised that Ballymore didn’t choose trees varieties, the suggestion of a few people (well before the tree dispute earlier this year). However two more unusual “vegetation” suggestions came in the form of English grape varieties and… inevitably… cucumber varieties.

Some of the odder suggestions came from people who got hung up on there being 7 towers. The seven dwarves (“Hi, I live in Grumpy House”), the seven days of the week, and the seven colours of the rainbow were all suggested twice. We had the last seven monarchs (which gets confusing with two Georges and two Edwards), seven planets and seven (rather than 8) points of the compass.

My favourite “whacky” suggestion though was to name the tower blocks after the Secret Seven: Peter, Janet, Jack, Barbara, George, Pam and Colin. Genius.

There were surprisingly few, shall we say, “satirical” entries, though someone did suggest “Totally, Out, Of, Keeping, With, West, Hampstead”. I don’t think that made the shortlist.

Alongside the winner, a genuine special mention to Jamie Murray, who put some serious thought into it and chose names linked to William Beckford. Beckford, whose name will appear on one of the buildings, owned West End House, which stood on the site of the development. Here’s Jamie’s submission in full:

As the towers in the West Hampstead Square development are to be built on the site of the old West End House, surely their names should be selected to commemorate eccentric author William Beckford, “The Sultan of Lansdown Tower”, who grew up there? So “Lansdown” is one obvious suggestion, but what about “Fonthill”, after the abbey Beckford built himself in Wiltshire?

Vathek, the antihero of the gothic novel for which Beckford is best remembered, is probably a bit too gothic, but what about “Carathis”, surely the most memorable character in the book? She’s based on Beckford’s own mother, Maria, who ended her life at West End House. And how about “Istakar”, after the destination of Vathek’s quest? It’s an old name for Persepolis, and has a lovely ring to it.

We ought not to forget “Azemia”, the heroine of one of Beckford’s more satirical works. Finally, while northwest London is already graced with a Mozart estate, we really must remember Beckford’s music tutor somehow: so what about “Amadeus” or “Wolfgang”?