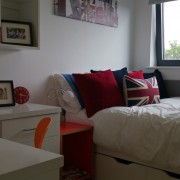 I was lucky enough to be given a guided tour of the new student accommodation on Blackburn Road a couple of weeks ago.

The building opens on September 1st, though the majority of students move in to West Hampstead a fortnight later. Contrary to my assertion some months ago, there are some British students, though as of two weeks ago the split was about 50/50. There is also a high share of postgraduate students taking up spaces.

It’s impressive inside, as it should be – the students are paying top-whack to live amongst us whampers. There’s also a rather nice courtyard area, which in good weather should be a good place to sit/lie out with a book.

I was shown, unsurprisingly, one of the nicest flats – on the north-east corner of the building with tall glass windows in the communal area. These flats are shared by eight people, each of whom has an en-suite bedroom while they share the living room/kitchen area.

There are also studio apartments with a self-contained kitchen area. I much preferred these myself. The one I saw, which was a larger one, was actually pretty spacious although it was unfinished!

Weekly rents start at £199 and go up to £259 for the “penthouse”. More than many people’s mortgages, though that includes concierge, secure bike parking, communal areas, a screening room and the all-important superfast broadband. TV licences are extra (and of course streaming television content through your laptop requires a licence). Cleaning services are also available at an extra charge. Using the power of Twitter I’ve put together some top tips for the students, although my definitive top 10 tips are going into their Welcome Pack, so I won’t spoil the surprise for any students reading this now!