Accidents, Algerians and aggrieved locals… It must be #whamptravel 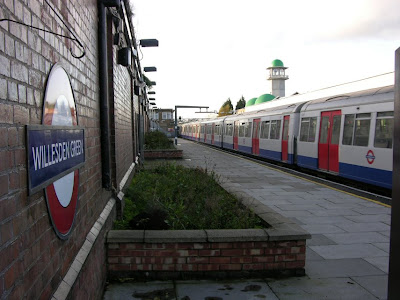 The challenges of getting to, from and around this part of London have once again dominated the local chat. Digest came out too early last week to catch the news of another traffic accident involving a bus on West End Lane.

Calls to change the traffic system came in, with suggestions of zebra crossings near Tesco’s. Perhaps, however, West Hampstead should be more cutting edge and take the approach that is gaining traction across Europe of Shared Space. The idea is to de-segregate road and pavement users. This might seem counter-intuitive but, where the idea has been implemented, the statistics show that there are fewer accidents because everyone (and especially drivers) tends to be more cautious. It is not a scheme that will work everywhere of course but perhaps West End Lane, which already has slowish traffic, could be a good testing ground. Already there is a campaign to bring the idea to Hampstead.

The other excitement of last weekend was that the Metropolitan Line made its inaugural stop at Willesden Green (which it will now do on weekends when Jubilee Line is shut ). Thanks to @PkerUNO for the photograph. Of course this weekend both lines were down. Plus ça change.

Wednesday evening was football evening, and demonstrated neatly the evolving nature of Kilburn’s population. Early on in the evening, Algeria beat Egypt to qualify for the World Cup, and immediately messages began to appear about honking horns on the Edgware Road and Kilburn High Road. A few hours later when Ireland were denied the chance of a penalty shootout by the hand of Thierry Henry, there was nothing but silence from the traditional Irish enclave, once affectionately known as County Kilburn.

First Capital Connect is never far from the news at the moment. Its timetable continues to be a work of fiction as staff work to rule. It has got to the stage where questions are being asked in Parliament.

To add to FCC’s woes, there is now a late-stage minor revolt about the proposed new station on Iverson Road. @joe_sayegh spotted this article in the Ham & High about residents arguing that the plans will remove parking bays and destroy the embankment. There will be a meeting on Tuesday, but Digest’s readers were largely unsympathetic. 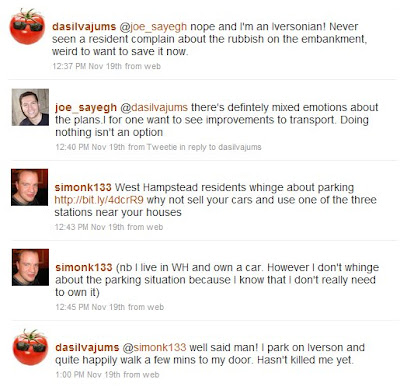 The plans are exempt from requiring planning permission, and the company will argue that it has made efforts to liaise with the local community using measures such as the drop-in meeting at the library a few weeks ago. Is this going to run and run? It seems a certainty that there will be a station on Iverson Road, but will residents manage to gain any further concessions? #whamptravel

Remembering the place of politics
Electioneering at public ceremonies of remembrance is frowned upon. Both Brown and Cameron have apologised for the photographers at Westminster Abbey to capture their appearances at what should be an apolitical event.

Old news for Camdenites. A council hoo-ha kicked up after Lib Dem PPC Jo Shaw was accused of muscling in on the borough’s Remembrance Sunday event and filming it. She issued a statement saying she would not be using the film for party political purposes and emphasizing her per-sonal connection to the armed forces.

Adding fuel to the fire, Lib Dem PPC (Hampstead & Kilburn) @edfordham posted footage of himself at an Armistice Day ceremony in West Hampstead on his You Tube channel. This incurred the ire of both Tory and Labour representatives alike.

Ed replied, but never explained what the facts to be checked were. See @RichardOsley’s blog for more.

Other news. @CamdenGP confirmed that H&K Green candidate Beatrix Campbell is on Twitter (albeit quietly). #whampvote

West Hampstead Digest No.6 Local news where you set the agenda Supper Club at The Wet Fish Café