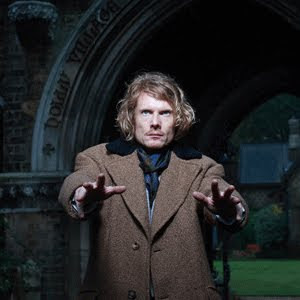 At several points during Darker Shores, the characters debate whether things are real because we perceive them, or whether they are real because we feel them. The 11-year-old boy next to me for last night’s performance both perceived and felt the reality of this Victorian Christmas ghost story all too vividly. Director Anthony Clark was clearly doing something right.
Michael Punter’s new play engages with the theatricality of ghost stories rather well. It begins by nicely blurring narration into action, thereby disrupting the audience’s understanding of what exactly is real and what exactly is now. If this makes it sound pretentious, fear not. Thanks largely to Tom Goodman-Hill’s outstanding performance as natural scientist and would-be Darwin refuter Gabriel Stokes, this is a play that seeks to entertain not confuse. Goodman-Hill dominates the play, even more remarkable when you learn that he was a very last-minute replacement for Mark Gatiss. The crumbling of Stokes’ crisp surety in the face of the inexplicable is far more convincing and compelling than Julian Rhind-Tutt’s evolution from Confederate impresario to fragile soul suffering post-traumatic stress. Indeed, in the first half, Rhind-Tutt’s Tom Beauregard appears lost at sea – his elongated southern vowels struggling in quieter passages and never quite convincing as either a Doctor of Spiritual Science or as a 19th century Derren Brown. He ups his game in the second half and some sort of equilibrium is restored between the male protagonists.
The two are joined on the Gothically draped stage by Pamela Miles’ doughty Mrs Hinchliffe, whose secrets are closely guarded in the folds of her housekeeper’s black dress, and by Vinette Robinson as cockney sparrer voice-of-reason Florence Kennedy. Kennedy initially seems too simplistic a character, but it is clear she has a larger part to play in the tale and both women perform well, especially Miles whose part is more subtle.
Amid the trickery and illusion (of which there is plenty) the frights and scares vary considerably in their intensity. Some of the moments that should shock are sadly rather rushed with not enough dramatic build-up. The 360-degree sound effects, on the other hand, are extremely effective at bringing the audience right into the action. The first sighting of the ghost is particularly well done, and spooked my young neighbour more than a Dalek ever would (he told me this during the interval).
Although the main stage is left relatively uncluttered, the wings are full of shadows and spotlights and curtains and columns. This has the excellent effect that you start to expect something to happen out of one of these dark corners every time a spirit is summoned. Yet the final revelation is a delicious surprise.
There is much humour in the play, largely based on superb delivery and timing, but on occasion the comedy releases the tension before rather than after a more dramatic moment. And as the audience relaxes into its seats instead of perching on the edge of them, it becomes harder to ratchet up the spook factor. This conflict sadly was the play’s weakness for me. It became harder to care about the characters and the resolution of the story and came perilously close to drifting into pantomime – albeit a well acted, grown-up pantomime. This was reinforced by a rather clunky exposition scene near the end that felt as if it should have been integrated more smoothly into the text.
Overall though, it is hard to carp. It was definitely a very enjoyable evening, contained some excellent performances and I would certainly recommend it for Goodman-Hill’s acting alone. 7/10
Darker Shores by Michael Punter
Hampstead Theatre until Jan 16th
*Disclaimer: I received a free ticket for the play courtesy of the theatre.
Image from Hampstead Theatre website

West Hampstead Digest No.8 Local news where you set the agenda Tremendous turnout for Whampgather II