Game theory is a strange way to start any meal. Perhaps if you were at the Fat Duck you might expect a soupçon of deconstrutivist philosophy to accompany a deconstructed soup, but at a small neighbourhood French restaurant I generally expect bread and butter to be the opening gambit.

Le Petit Coin had two special offers – there was a food offer (£15 for two courses, £18 for three) and a wine offer (half-price on a selected white and a selected red – £22/£23 respectively). But you could only choose one offer. Ahhhhh… No doubt people much cleverer than ourselves could have devised a cunning plan to get the best value from this, but as no-one appeared to have an app for that, we all went for the food option.

Then came the bread and butter.

Our table of seven was the only one troubling the kitchen that night, and service was thus reasonably decent, although one suspects they’re not that used to catering for parties larger than four. Between us we managed to try most of the starters – the menu is not extensive, and is all the better for it. Portion size varied hilariously: Alison’s square bowl of French onion soup would have kept a clichéd Frenchman happy for days, while Jamillah’s whitebait (unusually arranged all ‘swimming’ in the same direction), was half what you’d get at Greenwich’s whitebait specialist The Trafalgar Tavern. Two Caesar salads were heavy on the dressing and light on the parmesan; baked oysters with mushroom ragout were neither baked nor accompanied by what most people would call a ragout, but were perfectly reasonable; deep-fried brie did exactly what it said on the tin; while the lobster and crab ravioli was “good”. 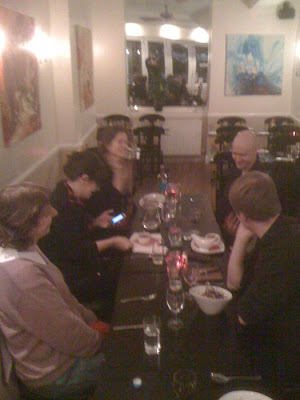 The mains emerged staccato style as the wine (a Rioja Crianza that was a little too chilled) flowed and conversation ebbed – or was it the other way round? Jane and Jamillah’s rabbit stew hit the mark, while Brad’s vegetable couscous was presented unusually in two chef’s ring-shaped roundels. In fact, chef’s rings featured prominently in every dish except Tom’s “slightly claggy” seafood risotto. My pork was cooked perfectly, and didn’t need the rather odd, thin, tarragon-laden sauce that was mercifully on the side, nor frankly the diced sautéed potatoes plated up inevitably in a chef’s ring and with unadvertised melted goats cheese completely unnecessarily drizzled in and among them. Tania and Alison had opted for the Wild Plaice [sic]. Can one even get farmed plaice? Sadly this simple dish was a disappointment – overcooked fish (this was the first dish to come out of the kitchen, and should have been the last), a beurre blanc that had gone badly wrong and a chef’s ring of ratatouille that, while opinion varied as to its standalone quality, certainly didn’t match the rest of the dish.
Desserts were a similarly mixed bag, and ordering wasn’t helped when we realised that between us we had two slightly different menus. Was the crème brûlée lavender or was it star anise. It was the latter, and was very good. The profiteroles were generous, but the apple crumble was tiny and noticeably non-crumbly.
The attempt to do fairly traditional French bistro food in what is a determinedly modern restaurant setting is always going to rely on getting the food right. Perhaps on a busier night the atmosphere might have led us to be more lenient, but sadly it was hard to get behind a place that was so inconsistent – even when the food is served by a very smiley girl who was doing her best.
Does West Hampstead need somewhere that’s such a gamble, even before you have to decide which special offer is right for you?
Ratings 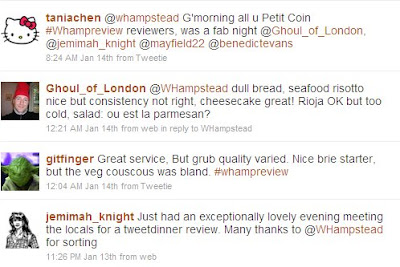 Competition time: Giraffe opening in Belsize Park Whamplunch on track at The Railway