“A party for Me?”
thought Pooh to himself.
“How grand!”

There can be very few people who have not encountered Winnie the Pooh. One of the great characters of children’s literature and I can’t help but feel also a precursor of Homer Simpson. Lovable, of “little brain”, and ever so slightly obssessed with food. 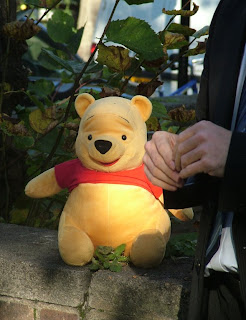 Pooh’s creator of course was A.A.Milne and – who knew – he was born in Kilburn in 1882. The house where he was living was destroyed in the war when a V1 fell in the vicinity and the site is now occupied by Remsted House, part of the Mortimer Estate, at the junction of Mortimer Place and Kilburn Priory.

Lib Dem worthy and sometime local historian Ed Fordham has launched a Historic Kilburn Plaque Scheme. Appropriately enough given the area’s Irish heritage, the plaques are green. The unveiling today of Alan Milne’s plaque was the first of what Ed hopes will be “at least 20” such plaques to be dotted around Kilburn. 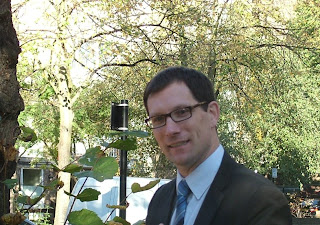 Under gloriously blue skies an impressive crowd was gathering for the big moment. Milne’s granddaughter Clare was present. 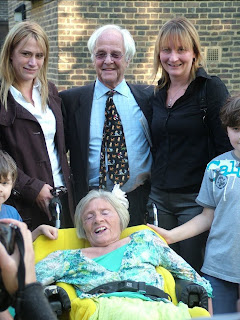 Ed kicked off with a few booster words for the area, before local historian Dick Weindling (he literally wrote the book) gave a short explanation of the heritage of the area – formerly the Greville Estate (and much earlier part of a 12th Century priory). 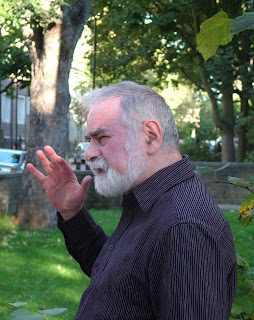 Weindling explained that Milne’s father had bought and ran a private school – Henley House – on the site at which 13 boys boarded. Four years later, A.A. Milne was born. In 1889, H.G. Wells was the science teacher there for a year and despite being highly critical of the type of education at Henley House he praised Milne’s father as a “really able teacher”. The Milnes sold the school in 1893, apparently concerned that “the neighbourhood was going down”. 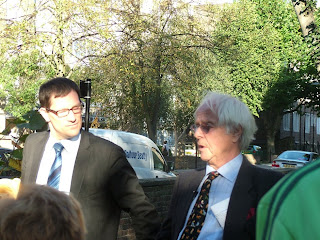 Michael Brown, chairman of the Pooh Properties Trust and wearing an approriate Pooh-themed tie, then said a few words about A.A. Milne himself. Of course he is famous for the Winnie the Pooh books, but he also wrote successful plays and adult books and was very much part of the literary elite in the interwar period.

It was time for the unveiling – suitably to be done by two kids. “Either the string will break, or the tape will stay up, or something will go wrong,” said Ed. 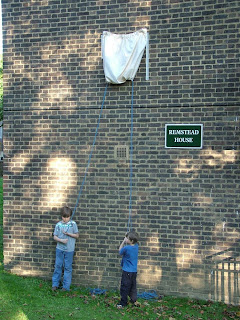 But really isn’t that what would have happened to Pooh? Piglet would have pulled with all his Strength. Rabbit would have advised from the sidelines and Eeyore would have pointed out all the things that could have gone wrong. The strings were pulled, the curtain fell, some tape remained and Pooh would have been a very happy bear. 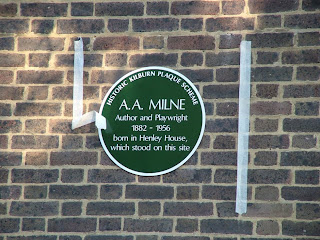