Obviously a lot of very major international news this week, but I was in the US all week where the media seemed concerned largely with the potential radiation fallout in the Tri-State area. And St Patrick’s Day. So what was happening closer to home?

After all the hullabaloo over Sainsbury’s opening, you turned out to be disappointed with the range on offer and the bad stock levels. Meanwhile, Costcutter by the tube station has closed for a 2-week refit.

A consultation process began for cuts to childrens’ centres, including Acol, while, the Netherwood Alzheimers centre received some heavyweight backing.

Caffé Nero confirmed it was looking to open in West Hampstead by May, and Cllr Keith Moffitt said that it would not need permission for a change-of-use to take over Atlanta Food & Wine.

A new graffiti fox popped up by Thameslink , while Mona Lisa appeared by Oddbins.

The troublesome Legacy nightclub on Finchley Road was given permission to open until midnight on Mondays but not on Sundays.

On Monday 21st, there’s a meeting about the Kilburn Festival at 7.30pm in the Kingsgate Community Centre. If you’re interested then go along.

At the Olivier Awards, La Bohème at the Cock Tavern was the surprise winner of best new opera production.

The air ambulance was called to a car accident late Sunday afternoon on Finchley Road.

People struggled to get good photos of the supermoon, but the next day saw a classic sunset and yours truly snapped this pic.

It was another disappointing result for the Wanderers after a really strong performance.

No Tweet of the Week this week, instead it’s time to “spot the mistake” on this photo of Mill Lane taken by Andrea. 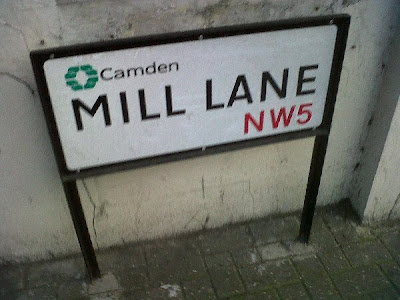