There was a fire above a pizzeria on Kilburn High Road.

Boris was in town to wield a shovel as work started in earnest at the new Jewish Community Centre on Finchley Road.

La Brocca held its annual oyster festival, and had a 1am licence granted for Thursday nights.

Fortune Green residents are starting to mobilize over the risk of being booted out from the Hampstead & Kilburn parliamentary constituency.

Meanwhile, Pam Chesters, former leader of the Tories in Camden has ruled out standing in Hampstead and Kilburn.

The lease of the famous Cock Tavern in Kilburn is up for grabs.

Estate agent Goldschmidt and Howland are ready to move into the site left vacant by Brian Lack.

Thameslink announced how the station will operate between mid-November and mid-January.

Someone has set up a BinCam to monitor fly-tipping by Sainsbury’s – and has become something of a cult figure.

Are you interested in helping preserve a local nature reserve?

Kilburn shoppers were “wowed” by apple juice from local trees.

The Sainsburys local on the corner of Cavendish Rd is closed until October 14th for a refit.

Are you a Jubilee Line user? WHAT needs your help.

Residents associations are trying to coordinate to tackle all the large local planning issues.

We went to the Wet Fish Café for#whampreview – what did we make of it?

Next Saturday, there will be a very special exhibition on the building of the Alexandra & Ainsworth estate, and a guided walk with Neave Brown, the architect of Rowley Way, at 2pm

Tweet and Photo of the week
Posted before the sad death of Apple CEO Steve Jobs, but now even more apposite. 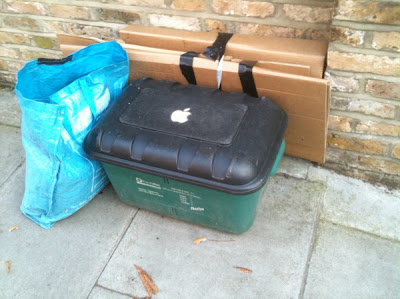 The Wet Fish Café under the microscope What have I missed since October 9th?