The Gondar Gardens reservoir is back on the planning agenda. Here’s the story so far. Gondar Gardens is a large patch of green land that sits over a disused Victorian reservoir. 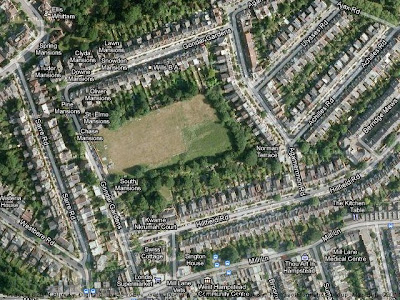 The land is owned by Linden Homes and Wates, who submitted plans to build a series of homes on the site in what was generally described as “Teletubbies style”. These semi-subterranean homes were deemed to be out of keeping with the area, and the threat to local biodiversity – most notably the local slow worm population – was enough to see the plan rejected after a vociferous campaign.

The developers are appealing the decision, but one would assume that they’re not especially confident of winning as they have invested in an entirely new and completely different plan for the site, which they were exhibiting at the library last Wednesday.The new plan take up much less of the site and instead just front onto the west side of Gondar Gardens road.

There would be 19 private homes and 9 affordable housing units. To keep the environmentalists happy, the development goes big on managing the remaining open space (which is far greater under this proposal than the previous one), and once complete the land would be handed over to a trust with covenants restricting any future development.

Architecturally, the designs so far apparently try to reflect the neighbouring buildings but in a modern style.

At the exhibition there was some debate as to whether this had been successful yet – the current design being very boxy and angular compared to the bay windows and pitched roofs of the houses around. The developer suggested that the design was a work in progress. At least, unlike some other developments locally, this one would not rise above existing buildings.

On Wedensday December 14th, there is a Camden Development Management Forum at the synagogue hall on Dennington Park Road. This is a chance for the public to hear more about the proposals and ask questions. Registration will be at 6.15pm for a 6.30pm start and the meeting shouldn’t last more than two hours. This is not a formal consultation meeting as no plans have yet been submitted.

The exhibition boards are visible below, or you can download them from www.gondargardens.co.uk.

At the West Hampstead and Fortune Green Area Action group meeting a couple of days earlier, Fortune Green councillor Russell Eagling seemed to imply that this development was much more in keeping with the sort of thing the council would look favourably on. It is also worth noting that these units would not count towards the 800 new homes required under the intensification plan that emanates from City Hall – that is focused entirely on the land around the three railways lines.
Gondar Gardens exhibition boards