Early Tuesday evening, there’s a drop-in consultation meeting about whether a dispersal zone should be implemented in part of West Hampstead. Whether you’re an arch libertarian or in the hang ’em and flog ’em brigade (or perhaps somewhere inbetween), this is your chance to get your views across. 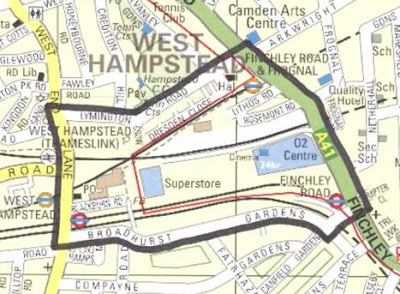 The idea is to “specifically target the problem of Anti Social Behaviour by youths and related incidents including large scale fights involving weapons, assaults, robbery, drinking alcohol and the use of drugs within the areas highlighted above. It is further aimed at targeting Anti Social Behaviour by groups associated with controlled drug offences on the West Hampstead Ward”

What’s a dispersal zone? Here’s the definition from Local Government.

A dispersal order will provide the police with additional powers to disperse groups of two or more people where the officer has reasonable grounds for believing that their presence or behaviour has resulted, or is likely to result, in a member of the public being harassed, intimidated, alarmed or distressed. Once asked to disperse, it will be a criminal offence for that person to return to the dispersal area for a 24-hour period.
If a young person under the age of 16 is stopped in the area after 9.00 pm and is not accompanied by an adult, the police can escort them to their home address, if they are either:

A dispersal zone can be as small as the area surrounding a cash point or as large as an entire open area of a housing estate or row of shops. Once a dispersal order is in place, the escort power can be used against any under-16, but it does not necessarily have to be used at all.

Camden police’s West Hampstead crime map for July 2012 isn’t online yet, but I’ve taken a look back over the past few months to see how many anti-social behaviour crimes have been recorded within the proposed dispersal zone. I also looked back at June 2011.

Such a short time series isn’t that meaningful, although the fact that of these five months, June 2011 was the quietest might suggest that the problem is indeed getting worse although as you can see from both March and April these stats can be skewed by a couple of larger incidents. A dispersal zone was recently put in place the Brent side of Kilburn, and there was one around Swiss Cottage that was renewed several times.

Not everyone agrees with the principle of dispersal zones. Aside from the fact that they can simply push the problem elsewhere, their detractors also argue that they infringe people’s rights. A group of young people hanging out on a street corner are not necessarily intent on causing trouble they may just be hanging out, and perhaps have nowhere else to go. The police of course argue that it makes their job easier.

If you’re interested in learning more about why this dispersal zone is being proposed, or want to have your say, then the meeting is Tuesday 28th August 17.45-19.00 at Hampstead District Housing Office, 156 West End Lane.