The developer had withdrawn its previous application for the 1930s Handrail House office building because, it seemed, it was hard to make it economically viable while still having a chance of getting planning permission and the developers and Camden could not agree on the level of affordable housing. Since then, it has been able to acquire the residential building (No.67) next door the offices, and that extra space had made this a feasible project, although the precise level of affordable housing has not been settled on. As with the original plan, the proposals include imrpovements to the Sidings Community Centre facilities and sports pitch.

The new proposal is not just broader in scope, it’s also slightly higher, with a set-back top-floor. This makes a five storey residential terrace fronting Maygrove Road. The building would be set back from street by 4m with an evergreen hedge to the footpath along Maygrove Road. To the rear a terraced communal garden would act as a boundary between the Peace Park and the development. The architects are trying to recreate a terrace-feel with the ground floor different to the upper floors “to create variety”. The family units would have private roof terraces, while the communal garden would be for ground and lower ground floor units. Height, as always, is a contentious issue. The developers pointed out that the building will be the same height as 59 Maygrove Road (which locals objected to), although less “bulky”.

At the meeting, Gavin Sexton of Camden’s planning team laid out the considerations that would have to be taken into account if a planning application is submitted. These are: loss of employment floorspace, permanent housing as a priority use, affordable housing, sesign & impact on open space, amenity, transport, sustainable design and construction/energy, and basement development. His full presentation is at the end of this article.

Paul Eden from Regal Homes, the developer, outlined the contributions to the local community, including upgrading the community centre and Peace Park. Here you can see some of their proposals, the sports pitch is off to the right of this diagram, and the main building you see top-right is Sidings Community Centre. 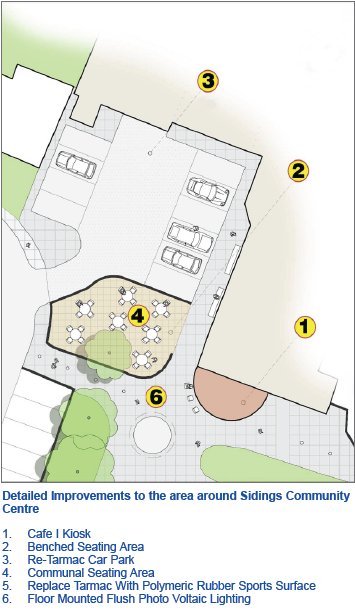 Whether these investments are primarily because the developers are community minded, or whether they think that getting the Sidings estate on board with the overall plan is going to make life a lot easier, these are still good investments.

Andrew Barnett from Hopkins Architects gave an overview of his firm (which designed the Olympic velodrome and the Wellcome Trust HQ in Euston), before discussing the site in more detail [see below for full presentation]. He explained that Numbers 65 and 67 are not considered of architectural merit and are rather an odd combination with dual frontage onto Maygrove Road and the Peace Park.

There were plenty of questions, a short selection of which are outlined below.

Someone asked about the loss of business use, and there was a supplementary comment about the need for small workshops. Handrail House has been vacant for more than year despite, apparently, the best efforts of the previous owner to lease the space as both offices and workshops. Camden’s own planning policies allow for re-use of sites where there is no demand, and thus the developers see no requirement to incorporate business space. In addition, the office tenant in No.67 has already relocated to a modern office in Finchley Road. Revised marketing evidence and a planning statement would be submitted with the new application. Camden polices supports the provision of new houses.

Another question was around the proposal for yellow bricks and timber in an area that is red-brick dominated. The architect said that they hadn’t made up their minds yet and that there are many types of bricks used in the area. The use of timber, he explained, is for sustainability reasons and to address energy efficiency and improve insulation. It is also elegant and would contribute to the appearance of the building. Modern window frames (not uPVC) which would be openable for natural ventilation would be incorporated.

There was a question about basement excavation and whether the development was car free. The proposal does include a basement, which would include the 10 disabled parking spaces, bicycle storage, plant equipment and the lower floors of duplex accommodation.

Expect a proposal to become a formal planning application in the next couple of months, at which point there’ll be a full consultation process.

Residents’ weekend parking in Fortune Green? What have I missed since October 29th?