The very sad news broke this morning that the man who was attacked at the end of last month in Goldhurst Terrace has died in hospital. 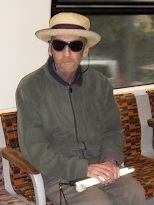 Douglas Hutchison, 60, who suffered from severe visual impairment, was better known to many by his pseudonym Professor Whitestick. His blog and Twitter account were widely read and his views on the arts held in high regard.

He and I had chatted on Twitter a few times, largely about accessibility issues at West Hampstead’s stations. He was always engaging. I hadn’t realised he lived so close by.

Tim Sommer, 18, of no fixed abode, was arrested for the attack in the immediate aftermath. He was originally charged with attempted murder and remanded in custody to reappear in court in February. I understand that the death of Mr Hutchison means that Mr Sommer is likely to be rearrested for murder.

Video: West End Lane fire Keep it in the neighbourhood: The benefits of buying local