Everyone laughed when I announced I was off to a personal training session at Gloves Boxing Club. Aside from any concerns or prejudices about women participating in combat sports, I don’t think people see me as particularly tough or aggressive. “What’s lighter and girlier than fly-weight?” mused my sister. “You’re probably powder-puff weight.” Ignoring the mockery, and inspired by Nicola Adams’ Olympic gold for Team GB, I figured when better than 2012 to step into the ring.

Suitably fired up, I flounced off to the club on Broadhurst Gardens. It’s housed in what was the ticket hall of the original West Hampstead Metropolitan Line station. The building has a cool industrial vibe with exposed brickwork and other original features; but I wasn’t here to admire the architecture, I was here to train like a boxer. 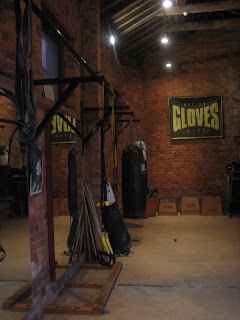 Ben – my trainer for the afternoon – took me through a set of exercises based on the different classes that Gloves offers. This was a great introduction to the various disciplines they teach, and gave me an insight into the club’s philosophy. You can train here to compete in “white collar boxing” events, but many club members are happy to stick to non-contact boxing training.

Gloves founder, Tony Riddle, has an impressive boxing CV having travelled the world and worked with big names such as highly-regarded coach Kenny Weldon, who himself worked with world heavyweight champion Evander Holyfield. This year, Carrie Barry from the US women’s boxing team trained at the club while recovering from a knee injury.

One of Tony’s core beliefs is that good training starts with your feet. There’s a large poster of a bare footprint on the wall, and my trainers were quickly cast aside as my whole workout was barefoot.

If shoes are bad, I soon learned that many other modern-day vices are even worse for encouraging unnatural movement and posture, such as spending a lot of time sitting down. “Chairs are the enemy,” declared Ben, as he ordered me to do about a million squats. Ouch.

We then spent time on toe drills, involving balancing (somewhat painfully) on broom handles to find where to put my weight. With regular practice, these exercises apparently help prevent bunions as you learn to avoid putting pressure on the toe joints. We also did some wrist exercises, beneficial for people like me whose wrists are weakened by daily typing on keyboards.

Then on to some kettlebell exercises and animal movements. I felt slightly silly crawling like a cat and emulating the movements of a frog, but apparently this is all part of getting back in touch with natural human movement patterns, which we’ve gradually lost since our hunter-gatherer days.

Finally, after this preparatory training and a warm-up, it was on to some boxing. It was quite exciting having my hands wrapped and putting the gloves on. I was instantly transformed into a fearsome-looking pugilist. As you can see from the picture. Ahem. 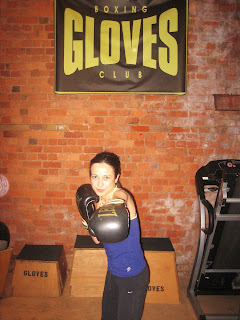 Ben’s first job was to banish any Wii Sports perceptions of boxing, which leads people to tire their arms quickly with aimless punching. Instead, he showed me how to move efficiently, shift my weight and use my body’s natural momentum to throw the perfect punch. Footwork plays a big part in this (it’s back to the feet again).

I was soon adopting a passable stance and moving with light springy motions as instructed. I’m not sure I quite managed to look as effortlessly graceful as Ben, who is also a Parkour and free running practitioner. Finally, after much practice, I managed to land a few satisfying punches on a punch bag.

I was curious about how many women use the gym. Tony reckons the male-female split is about 60/40. More women than I’d expected. He also said that it’s often easier to train women as we tend to have a “better, quicker grasp of the movement patterns,” though of course this is a generalisation!

The session was over. I felt exhausted but also exhilarated. It had been very satisfying to train in a meaningful discipline and learn real sporting skills instead of performing dull repetitions on a gym machine.

The only downside for me is the cost. Access to professional coaches and specialised training doesn’t come cheap, and this is reflected in the membership prices. There are various packages depending on whether you opt for one-on-one coaching or join in group classes. The ‘Heavyweight’ membership, which lets you attend unlimited timetabled classes, is £125 per month (although there’s a special offer price at the moment of £99). The ‘Bantamweight’ package, for three classes a week, will set you back £60 (usually £69).

I feel this is good value, but you’d really have to commit to attending regularly and build it into your lifestyle. This might be a stretch for those of us who have guiltily neglected gym memberships in the past. However, unlike a conventional gym, you might just develop a passion for honing your skills in “the sweet science”, which may motivate you to return.

If you’re considering investing in personal training, then this boxing regime might be the way forward – and it doesn’t have to mean facing an opponent in the ring. As the Gloves motto says, “Training like a boxer is different to training to be a boxer.”