The West Hampstead place plan, published last year, set out a lot of areas for action. Last week, Camden issued a two-page update on progress. Later in the year we’ll summarise progress against all the action points, but this is a good chance for a mid-term report. 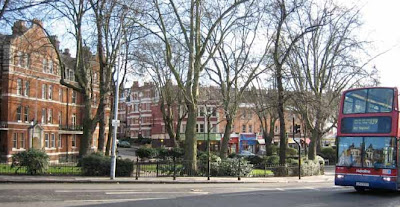 On the first, the update refers to the Neighbourhood Development Forum, which is moving forward with its plan for the area and which the council supports through advice. The area covered by the forum is now under consultation (you may have seen some signs on lampposts to this effect).

This of course is not specific to the place plan – these NDFs are popping up all over the country and council support is part of the process. The update also says, “It is particularly important to establish more detailed planning guidance for the interchange area… as soon as possible. This is to ensure that if proposals come forward, the opportunities for a coordinated response to achieve the desired objectives are not missed”. Which is council speak for “lets not f*ck it up”.

This interchange plan has snuck under the radar a bit. I first heard about it at an NDF meeting late last year, although the minutes of the most recent meeting shed more light on it:

“Council officers would be carrying out work on this project; it’s mainly a technical piece of work to see how the West Hampstead Growth Area can accommodate the extra new homes and jobs as set out in the London Plan. They will work with the NDF on the detail of their proposals, although the Forum is not obliged to adopt its policies or recommendations. If both documents are approved, the NDP would sit above the framework as a statutory plan; the framework would be classed as ‘supplementary planning guidance’.”

In other words, it may not be of much concern (one might argue that it’s a waste of council time).

The second objective was getting community input on how to spend the money developers have to give for local improvements (the “Section 106” money). There is a meeting on February 21st, organised by WHAT, to discuss just this. It’s at the library from 7.30-9.45pm and is open to everyone. If you’re one of the people who grumbles that it’s the same few people always deciding what happens here, why not go along and have your say – you might be pleasantly surprised at the reception you get.

The update report cites the farmers’ market as an example of moving in the right direction, claiming (rightly) that it’s a great success and that it adds “variety to the shopping experience”.

Less clear-cut are the advances being made by the West Hampstead Business Forum. While the report suggests that it’s going from “strength to strength”, it doesn’t yet seem to have found its voice or even be quite sure what issues it needs to focus on.

I’ve reported already on the latest attempt of Mill Lane traders to coalesce into an active campaign group, and the council has been supportive to some extent. However, little seems to have been achieved yet in terms of encouraging landlords of vacant premises to fill them, or in terms of the traders themselves delivering against some of their creative ideas for the street.

The “look and feel” of the shopping area also falls under the Economy banner. Here, the place plan update refers to the council’s targeting the large billboards, such as those taken down from the bridge over the tube lines and says, “work is continuing to remove the remainder of the large billboards that do not have consent.” The council is also going to start targeting the the smaller signs – like all those A-boards that clutter the high street.

The update makes no reference to any of these points and it’s hard to think what has been done in terms of open spaces although there is a move to improve Kilburn Grange Park (more on that over the next few days). The Friends of Fortune Green continue to drive improvements as phase two of the park’s renovation gets underway. This will include excavating the remains of a WW2 air raid shelter, refilling and re-turfing part of the green, replacing two noticeboards and adding a new one, landscaping a “children’s corner” and laying a ‘2012’ legacy running route.

(If you want to help out, then block out Sunday 3rd March (1-4pm ) to cut down the perennials and Saturday 16th March (also 1 to 4pm) for planting.)

Environment grade: D (higher grade could be available if you show your workings)

Again, there’s no mention of progress here on the update. Extra primary places have been secured with the proposed Liddell Road school site (although work has yet to start on this), and Emmanuel School’s expansion also helps – although this predates the place plan. It’s not clear what else has been done under this section – or at least not clear what the council has helped facilitate.

Transport
There is just one objective:
Continue to improve how people move around and between the three stations
The update report refers to a drop-in session held in July, which threw up several proposals to address road safety and improve cycling. Work is already underway in consulting on or implementing these, which include alterations to speed bumps in Sumatra Road, and improving the junction at Inglewood Road and West End Lane.

“Other schemes potentially include looking at the loading restrictions along West End Lane, alterations to parking bays and opportunities for contraflow cycling.” The first would be widely welcomed by everyone apart from Tesco I’d imagine. The second could be popular with the local businesses who often cite parking restrictions as a barrier to a thriving weekday economy. As for contraflow cycling, there aren’t many one-way streets left that haven’t either become two-way for cyclists or that have been explicitly ruled out of such a change (e.g., Broadhurst Gardens).

Although the council have been quite active in this area, it doesn’t escape my attention that these issues don’t relate specifically to the area around and between the stations. The Legible London signs that have gone up are not a Camden-specific initiative.

Overall, a mixed performance. We should perhaps remember that council resources are stretched at the moment, and that some of these issues will not be solved in six months. Nevertheless, it would be good to see the placeshaping team running through all the action points in the plan and giving us a quick update on all of them – or a timeframe for acting on those that cannot be quick fixes.