In April the film club saw Trance, which was enjoyed by almost everyone.

Our next movie is also London-based and also the work of an original and eclectic British director; in this case Michael Winterbottom. His latest film, The Look of Love, reunites Winterbottom with Steve Coogan (they worked together on 24 Hour Party People and the recent TV series The Trip) to tell the life story of strip club entrepreneur Paul Raymond. 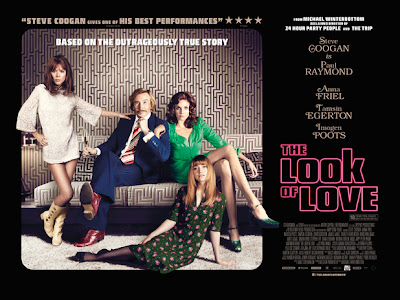 Winterbottom certainly has a thing about sex and movies – his Nine Songs is supposedly the most explicit film to get a general release in the UK. He’s also a highly political director (Road to Guantanamo and The Shock Doctrine). So will this be a thoughtful examination of the politics of pornography and exploitation or a sexy romp through Soho? Come along on May 5th and find out.

The film is screening at The Tricycle at 8pm on Sunday 5th May and tickets are already available.

How do I book?
Through the Tricycle Box Office on 020 7328 1000. We have a block of seats reserved right in the middle of the cinema so mention “NW6 film club” if you want to sit with us (or don’t if you don’t!). It’s unlikely to be booked out so feel free to turn up on the night as well.

How do I find you?
We’ll meet up in the bar area at the Tricycle from 7.15pm, so collect your ticket and come and say hi. You’ll spot the crowd! There’s no need to tell us you’re coming – though a tweet is always welcome.

After the film we’ll go to the Black Lion opposite the cinema for a drink and chat. It’s a bank holiday weekend (hurrah) so do come along for a post movie meetup.

It’s going to be a great night, I hope you can join us. As always, follow @NxNW6 for updates or the #nw6filmclub hashtag.