The website for West Hampstead Square, the new development opposite the tube, went live as the marketing suite was assembled.

There was a tremendous turnout for the free outdoor screening of Back to the Future on Saturday night. More than 200 people brought their picnics and watched Michael J Fox navigate the 1950s. 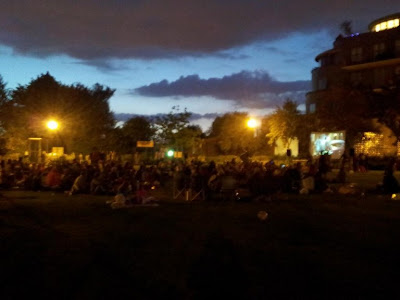 Tim Sommer, the German teen who killed Douglas Hutchison last year, was sentenced. He will be detained in Broadmoor indefinitely and likely extradited to Germany where he is wanted in connection with a murder there.

Another Labour candidate, Indra Adnan, threw her hat into the ring for the Hampstead & Kilburn nomination.

The Black Lion in Kilburn held a wake on Saturday night as it switched off its draught taps in protest at the price it had to pay for the beer.

Police are looking for help in identifying the man who was hit by a train on Tuesday evening by West Hampstead Thameslink.

NW6 Film Club will be on June 9th. It’s a screening of the Globe Theatre’s production of Henry V and Film Clubbers receive a discount.

A woman was arrested for drink driving after a man died in a car crash in Kilburn. It’s the third fatality on the road in 18 months.

The police helicopter helped officers on the ground after a would-be burglar was disturbed around Sumatra Road on Tuesday. Meanwhile, a satnav was stolen from a car on Messina Avenue.

Locals can get a discount on preview performances of The Tricycle Theatre’s Bracken Moor (see top-right of the page for details).

Schnitzel (the new chicken and aubergine restaurant in West Hampstead) has a Facebook page.

Meanwhile, Tom’s been eating at Sirous.

Kirsty & Phil are planning to make another visit to West Hampstead.

A new hairdresser is on the brink of opening. Funmi, as it’s called, is a company specialising in natural hair extensions.

As the sun finally made an appearance, ZENW6 decided it was time for a pedicure.

We learned how much it costs to advertise inside the Overground station.

It was standing room only at West End Lane Books as I interviewed local author Leo Hollis about his book “Cities Are Good For You”. He’s not keen on conservation areas y’know!

People are getting concerned about the state of the water in the O2 centre’s aquariums. Apparently the filter is broken, but the fish are deemed to be ok!

Four giraffes went down West End Lane on Friday. They were heading for Abbey Road.

A planning application has been submitted to turn the empty shop next to Jumanji pets on Birchington Road into a restaurant.

In a poncey bar in West Hampstead. There’s a long table of Watford fans eating tapas in silence. It’s like a surreal gentrified Last Supper.
— Duleep Allirajah (@DuleepOffside) May 27, 2013

The well heeled of West Hampstead