I’d just come back from Switzerland where I’d had a really good schnitzel. “I wonder who does the best schnitzel in West Hampstead”, I thought to myself. Suppose I better find out. Then I looked at my waistline and decided I should ask Fiona to find out instead.

“I’d agreed to do a West Hampstead ‘schnitzel-off’ back in those grey days, when “summer” was technically accurate rather than a description of the weather. Four meals of hot fried meat in one week? Sure. Then came the hottest week of the year so far, and my thoughts turned to big salads and poached salmon. Still, aided by some willing friends and a fridge piled high with veggie salads for lunch, I stuck to the plan, and prepared to do battle with the schnitzel on four consecutive nights.

First up was Schnitzel Chicken and More. This café, on the corner of West End Lane and Mill Lane, had prompted a debate on Twitter when it opened a few months ago as to what exactly the ‘more’ would be. Turns out it’s aubergine.

I generally like places that only do one or two things, as long as they do them well. At least it makes for a stress-free ordering process, right? Except, I don’t think I have ever been more flummoxed by a menu. I’m smart, I eat out regularly, so it should have been easy. But it wasn’t. There was just too much choice; you have to choose your style (pita, baguette, salad or platter. Wait, what does the platter come with?), then your filling (chicken, grilled or fried, or aubergine), your schnitzel coating (breadcrumbs, matzo meal or house mix), your flavour (garlic, BBQ, Dijon, oriental, spicy), and then your sides (including a choice of chips or home fries). And then, hold on, what are these favourites at the bottom? The last problem I expected to encounter this week was a difficulty in deciding what to have.

After a good five minutes with the (lovely and patient) waitress we ordered pitas, garlic chicken schnitzel fried for Jonathan, spicy for myself, and sides of hummus and chips to share. As we tucked into the complimentary pickles, two plain pitas, a bowl of hummus, and the chips were brought over. We assumed the schnitzel would arrive separately. The pitas were warm and soft, the hummus creamy with a swirl of tahini in the middle, and the chips hot, salty and crisp. So far so good. We were then asked to come inside to choose from the counter what we wanted in our pitas. But I thought our pitas were already on the table? What was happening now? I opted for red slaw, tomatoes, chilli sauce and yet more hummus. My chicken was tucked inside and I took it back to the table deeply confused. 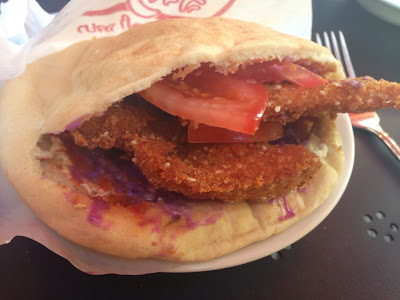 The schnitzel itself was pretty good; thin and juicy, and coated in a layer of crisp breadcrumbs mixed with sesame seeds. It was also low on the grease (a quality I didn’t fully appreciate at the time) and, when combined with the other fillings, the whole dish was a satisfying, tasty, meal. Having now got the hang of the menu, I would happily go back. The pita on its own would make a lovely lunch.

The following night was an altogether different experience. I met my friend Seán at One Blenheim Terrace, which is on a quiet street nestled between St John’s Wood and West Hampstead. We were seated on the outdoor terrace with a pristine white table cloth laid with polished silver and gleaming bulbous glasses. It was all rather civilised. After the previous night’s hassle I was relieved to find only the one schnitzel on the menu – Weiner Schnitzel Holstein (£22.50) – which we both promptly ordered, along with sides of mash potato and spinach to share. When our schnitzel arrived my first thought was how very large it was. 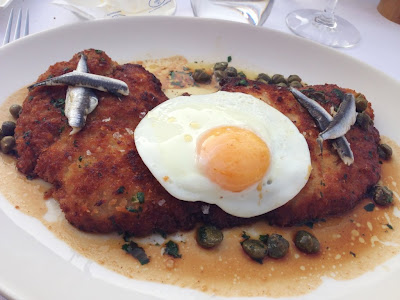 It was clearly made from good quality veal, but it was a bit chewy and the breadcrumb coating, while having some crispy bits, was covered in a slight residue of oil. The wobbly fried egg, salty capers and anchovies, and nutty beurre noisette, however, were all excellent, as was the mash, which was made with an unhealthy amount of butter and cream (as it should be), and the nutmeg sprinkled spinach. When it came to dessert, we took the in-for-a-penny, in-for-a-pound approach to fat, and ordered deep-fried oreos and profiteroles. Both were delicious, but perhaps not the most sensible choices.

By the third evening I was feeling slightly apathetic at the thought of yet more schnitzel. I arrived at The Gallery a few minutes early, and steeled myself for the task ahead with a swift gin and tonic. As I waited for my friend Tom to arrive, the manager came over to discuss this article. This prompted a guy at the next table to lean over and ask if I was ‘Schnitzel Fiona’. Oh god. I’m famous. And not for anything worthwhile; for eating bloody schnitzel. I replied that although it was not my preferred choice of nickname, for the purposes of this week, yes, yes I am indeed Schnitzel Fiona. I fear I may never live this down. The schnitzel was British rose veal served with creamed potatoes and wild mushroom sauce (£10.50). 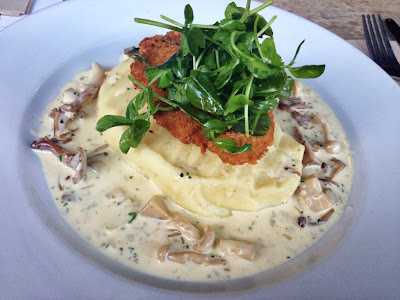 I was pleasantly surprised. The meat was tender, and the crisp crust had structural integrity, holding itself together away from the meat. The massive mound of mash was perfectly acceptable, if not as flavoursome as the night before, as was the creamy mushroom sauce. It was all well done, but it did feel rather like something you would have served at a 1970s dinner party.

On the last night I practically skipped to meet my flatmate for my final night of schnitzel at the Czechoslovak Restaurant. It’s a very odd restaurant – just a house with a statue of a guy in a chef’s hat standing guard outside. We found a table in the garden at the back, and desperate for a bit of variety, we ordered one Czech Club Schnitzel with potato salad (which the barman, once he’d stopped flirting with a Czech girl, sold me on by saying it was “the best”), and one veal schnitzel with chips.

When our food arrived I’ll be honest and say it was one of the less appetising plates of food I can remember – and that wasn’t just because it was my fourth schnitzel in four days. The club schnitzel was covered in a mound of rubbery cheese, a slice of lemon, raw onions and a squirt of BBQ sauce. The accompanying potato salad looked, well, you can see the picture. 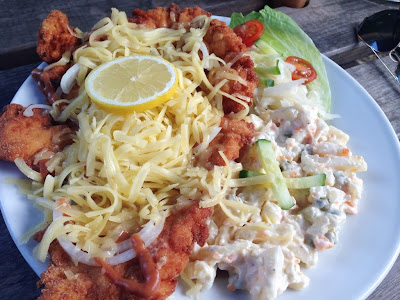 We took a tentative bite. The chicken had a watery texture that I associate with a chicken that has not led a happy life. The veal was very gamey, and the potato salad… lets just say that it wasn’t “the best”, as the barman had promised.

The chips were alright though, and the batter on both schnitzels was nicely seasoned, although it was still covered in a thin layer of oil. Neither of us finished. As we were walking home, my flatmate asked me to slow down as she was too full of schnitzel. Too full of schnitzel?? HOW DO YOU THINK I FEEL??? I’ve eaten it for a whole week! Thank god it’s over, I thought. I can go back to ordering what I actually fancy in restaurants.

Only I couldn’t. I woke on Saturday morning to the news that Moment serves schnitzel, and that I couldn’t omit it. Sigh. So on Sunday lunchtime I walked through the blazing sunshine to sit in the cool dark West End Lane café. Moment’s chicken schnitzel comes with chips and a vegetable salad (£11.50), which after Thursday night’s meal, I was rather relieved about. I was offered a choice of either grilled or fried, and while I would have preferred the former, I felt to be fair to the other schnitzels I should go fried. 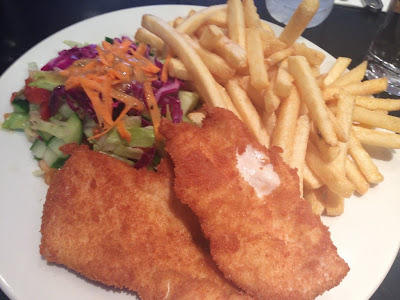 The chicken was juicy but the coating was once again rather oily. I understand that schnitzels are fried, but surely you can soak the grease off with a piece of kitchen paper before serving? The chips were ok, as was the salad, although it did suffer from an overdose of cucumber. The whole meal was nice but, ketchup aside, it just didn’t really taste of much.

Oh, you’re not done yet Schnitzel FionaSoon after publishing this article we realised we’d missed one more local schnitzel-server: David’s Deli. Just a few days after breathing a sigh of relief at being able to eat what I wanted, I once again found myself ordering, through slightly gritted teeth, yet another schnitzel.

The saving grace was that it came with the option of an almost weather appropriate rice salad and yogurt (£8), and I was able to sit outside on David’s rather nice decking. On that day they were offering a special homemade lemonade with mint and rose water (£3.50), which arrived at the same time as my main. The drink, despite sounding rather nice, was actually almost undrinkable. It was too acidic with barely any sugar in it, and the rose water left a lingering taste of bath suds. Sorry, but not for me.

The schnitzel was helpfully pre-sliced, but rather soft and floppy, so although the coating, had a nice peppery taste, there was zero crunch. It made me think that it had been reheated rather than freshly fried. 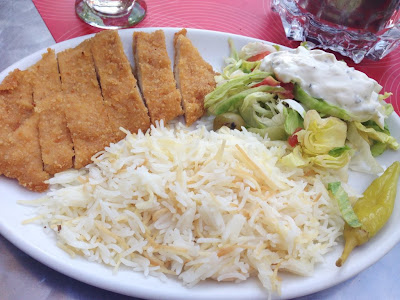 The rice salad turned out to be rice AND salad rather than the expected combination of the two. The salad was a bit tired (perhaps from having been put on a hot plate), but the nutty long grain rice was lovely and the tzatziki, made with cucumber and dried mint, was delicious. There were also a couple of olives and a mild pickled green chili.

My suspicions were confirmed when I went inside to pay and saw a plate of precooked schnitzels sitting under the counter, and a microwave ready and waiting on the side. It was a shame as had the chicken been freshly cooked I think it would have been very good. I enjoyed the meal more at David’s, but Moment’s schnitzel was freshly cooked and very crisp, despite the thin layer of oil.

Lets have the scores
So, drum roll please, what’s the final verdict? Aside from learning that schnitzel can be slotted into lots of different cuisines, not just it’s mother Austria’s, I’m excited to reveal that Schnitzel Chicken and More does actually serve the best schnitzel in West Hampstead. It’s lucky as they’ve named the restaurant after it.

After that I’d put One Blenheim in next place, then The Gallery, Moment and David’s Deli tying for fourth, and – sorry plastic chef – the Czech restaurant brings up the rear.

Now, if you’ll excuse me, I’m off to eat a very large salad.”

The Gallery and One Blenheim Terrace gave us our schnitzels on the house, which was very nice of them, but didn’t influence the outcome in any way.