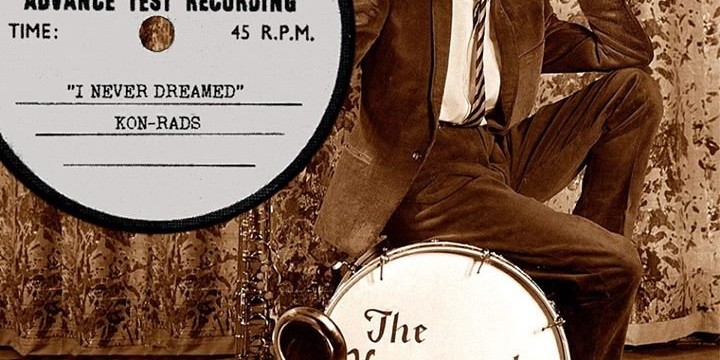 He was just 16 and still known as David Jones, but this was his first ever professional recording session. He wasn’t even on lead vocals.

Die hard fans can visit the David Bowie website for the full story, but here’s the overview.

On August 29 1963, The Kon-rads, David’s band, quickly recorded just one song live at Decca Studios on Broadhurst Gardens in West Hampstead (now the ENO building). They laid down a new song of their own composition called ‘I Never Dreamed’. There were talent scouts waiting to give the thumbs up or down. This was just two years after The Beatles had been turned down by Decca of course.

Bowie wouldn’t be Bowie for another few years – David Jones was too close to the Monkees’ Davy Jones – but this recording session would mark the stat of one of the most remarkable careers in pop music. Bowie was only on backing vocals, it would be another 10 months before Davie Jones and the King Bees recorded “Liza Jane”, also in West Hampstead.

Decca’s master recording of I Never Dreamed has vanished, but there were some metal acetate discs cut at the studio. However, none have ever surfaced and two of the Kon-Rads have lost their copies.

The Bowie website has, however, managed to come up with the original lyrics to this historic track:

Sabrina Moss murder: One week on