It’s been around since last December, but we’d never actually reviewed Bellaluna. Somehow the brown sign hadn’t lured me in and although I know predecessor J’s had a devout following, my own experiences there had never been spectacular. It was, therefore, with mild trepidation that our group of six ventured into the brightly lit restaurant for the first of the rebooted whampreviews.

And we had a damn nice meal.

Slightly suspicious of the set price menu, which just seemed too cheap, we ploughed our way manfully through a wide range of starters. A glance at the table behind us where a man appeared to be eating a plain pizza base elicited a cry of “garlic bread!” from James, and that was promptly added to our order.

The starters were the highlight of the meal for almost everyone – nicely presented, generously portioned, and suitably varied for us to all enjoy. Main courses were good, but more of a mixed bag. My grilled tuna steak was ok, but definitely a bit overcooked; the pizzas looked nice but not quite up to Sarracino or even La Brocca standard. Kimberly’s chicken and spaghetti dish was the most underwhelming – more something from a disappointing children’s party than a West Hampstead restaurant. Tom’s seafood pasta was the best looking dish. 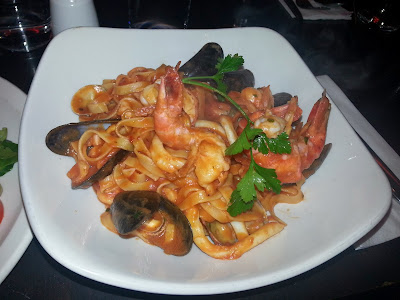 We worked our way through a few bottles of the Nero d’Avola (£17.90) [top wine tip: if Sicilian wine is on a menu, order it], and some of us even had room to trouble the dessert menu. 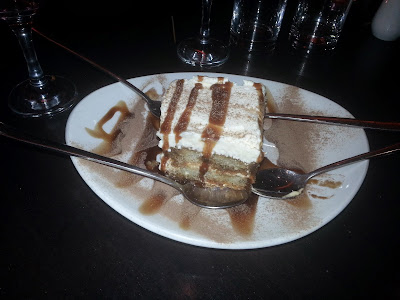 Overall though, Bellaluna exceeded expectations. Friendly service, food that was good value and enjoyable, and (bright lighting aside) a nice atmosphere. It’s not a special occasion sort of place, but if you fancy a cheaper meal out on West End Lane, then definitely check it out.

Now, the idea of the new-format whampreview is that my fellow reviewers each get to have their say. Here goes:

James: Starters were probably the most impressive part of the meal; generous helpings of freshly prepared dishes, which were perfect for sharing as a table. I particularly enjoyed the melanzane alla parmigiana (oven-baked aubergines). My pizza dello chef was good value and was effectively their take on Pizza Express’ popular pollo ad astra. My companions seemed to find the inclusion of sweetcorn somewhat laughable, but it was an enjoyable pizza with just the right amount of toppings. For dessert I sampled the panna cotta [Ed: “sampled”? Surely “scoffed”], which seemed genuinely homemade, but would have been better without the strawberry sauce from a squeezy bottle. Overall, this is a good quality local Italian restaurant that is worthy of its place on West End Lane. And there’s nothing wrong with liking sweetcorn on your pizza. 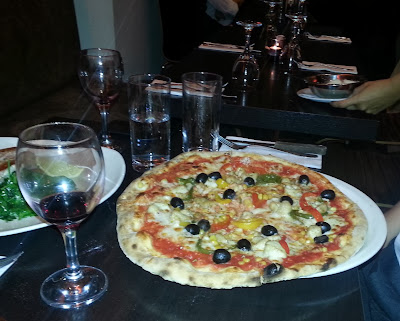 Elena: I was positively surprised by the dinner at Bellaluna. The tiramisu was great and the starters were also very good. The imported buffalo mozzarella was very fresh and the ham and bresaola were very good quality. The spaghetti bolognese was good, although I preferred the starters and the desserts. Overall, a good value experience. 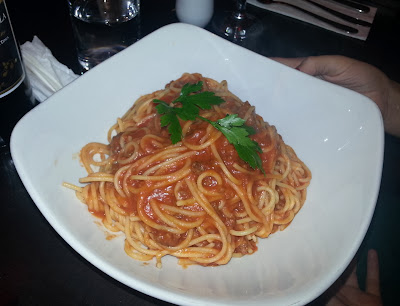 Kimberly: I’d always been a bit dismissive of Bellaluna based on the frequent (too-good-to-be-true?) deals advertised outside and the slightly cold décor. However, the food was much better than appearances might suggest. It’s a thoroughly decent local Italian at reasonable prices. I particularly enjoyed the mix of starters, with some good parma ham and buffalo mozzarella in the insalata Bellaluna, a good melanzane alla parmigiana and tasty calamari fritti. And despite my companions’ scoffing that I’d basically chosen a children’s meal with a pollo alla Milanese: the pasta was good and the chicken was flavoursome; though, spoilt as we are in West Hampstead, you might expect more than breadcrumbed chicken and tomato pasta for the price. The wine was very drinkable, perhaps best displayed by the fact I can’t remember which red it was now. I’d definitely go back – though I might opt for something more adventurous for my main course next time.

Tom: I enjoyed our evening at Bellaluna. Starters were appetising and fresh, with the bresaola deep in flavour as well as colour. Garlic flatbread was great, while hams, shaved Parmesan and a baked aubergine dish were all very pleasing. My main – seafood tagliatelle – was a robust dish; the pasta seemed to have been finished in the nicely-gauged, tomato and white wine based sauce, and there were some very fresh and gently cooked prawns to savour. Salads – not bad – I’d have preferred a sharper, traditional dressing (sod off, balsamic!), some onions (absent from the mixed option), and being a little fussy, tomatoes at room temperature. Service was great and the restaurant clean, neat and appealing. I’ll be pleased to go back.

Nicky: I liked Bellaluna more than I thought I would – the welcome was warm and the room felt cosier than its outward appearance suggests. The selection of starters we shared were all a bit too hearty for me. Rather than delicious little morsels to stimulate the appetite, the big plates that arrived loaded with cheese, salad and cold meats made me feel anxious that I wouldn’t be able to eat much of the main course. But maybe that’s just me. My Fiorentina pizza was good – thin, hot, and correctly served with a soft egg. As predicted though, I couldn’t finish it. It’s not trendy or romantic, but the food is decent and good value. I’d go again for a gossipy catch-up with a group of friends.