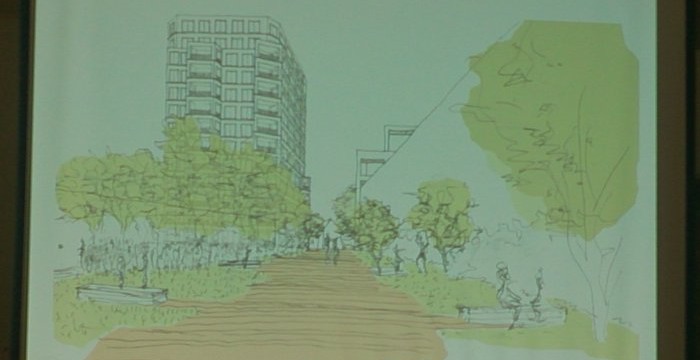 Last night’s public meeting to discuss Camden’s proposals for Liddell Road was always going to get tetchy. Alex Bushell from Camden’s planning department struggled to keep on top of an audience that grew increasingly frustrated as the evening drew on.

The seeds of dissent were sown when architect Prisca Thielmann from Macreanor Lavington failed to bring the one slide everyone really wanted to see – the cross section of the site showing the 14-storey block. She also found it hard to talk about the development in terms that lay people understand. Phrases such as “the tower block will animate the park” didn’t go down well with an audience that seemed predisposed to be sceptical. 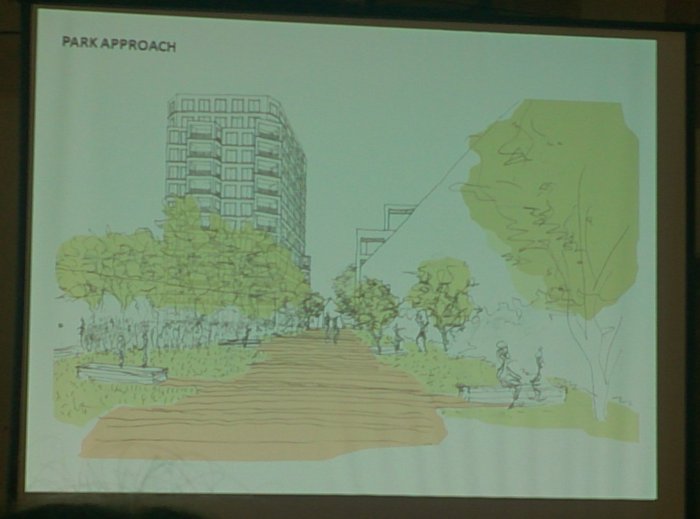 Readers of West Hampstead Life wouldn’t have learned much new about the proposals. One fact that came to light is that the £6.7 million Camden received from central government to build a new school is now going to Liddell Road. However, this simply means that another £6.7 million from the site can be spent elsewhere in addition to the £3 million surplus the scheme will already generate, so it’s having no material impact on the scheme.

Apparently, West Hampstead residents are expected to take this on the chin because the new Emmanuel School building was funded by money that came from outside of West Hampstead. It’s a fair point, but overlooks the fact that West Hampstead residents are experiencing an incredibly rapid period of growth that has been forced upon them and that will irreversibly change the fabric of the community. If money generated by this growth then leaves the area when it could be used to mitigate or alleviate some of the pressures this change will bring, it’s no suprise that residents are unimpressed. To expect otherwise would be to expect a degree of altruism that few communities would be likely to display. More school places are, after all, a statutory requirement not a frippery.

Naturally, there were plenty of questions last night about the height of the tower block and whether there is any way in which it could be lower, or moved to the other end of the site, or both. The block was memorably described by West Hampstead NDF chairman James Earl as a “middle finger to West Hampstead” in his barnstorming speech last night. There were also questions about the school – although it’s worth remembering that the school has already been approved by Camden. There is still debate about the catchment area, however, and lots of questions about the traffic impact.

There was strong feeling about the lack of any affordable housing, especially in light the additional £6.7 million funding, but the argument remains that for the scheme to be financially viable there can be no affordable housing. Financially viable means also generating that £3 million surplus, although why this is £3 million and not £2 million or £4 million is not clear.

Five of the six West Hampstead and Fortune Green councillors were present (Angela Pober (West Hampstead) was at Frank Dobson’s grand farewell announcement instead – an apology for her absence would probably have been appropriate). Phil Rosenberg (West Hampstead) and Lorna Russell (Fortune Green) both spoke, requesting that the scheme be looked at again to see whether there wasn’t some way to reduce the massing and to work with the community to improve the scheme.

Cllrs Flick Rea and Richard Olszewski chose not to comment specifically on the plans, as both are on the planning committee and speaking now can prejudice their position and leave them unable to vote. Cllr Rea did however suggest to the chairman that another such meeting would be valuable given the strength of feeling and the numbers of people in the room who were unable to get a chance to speak. No such commitment was forthcoming.

The lack of clarity and transparency over the economics of the site is a problem Camden councillors and officers must address (and is one that’s been raised before in conjunction with the loss of jobs on this site). The better understanding residents have of the business case, the more likely they are to appreciate the challenges that the council faces in delivering the much-needed school. It’s a long shot to suggest that it will bring everyone on board with a 14-storey tower block, but greater transparency on the proposals might at least foster a more sensible debate and give residents some confidence that West Hampstead is not simply seen as a cash cow by the Town Hall.