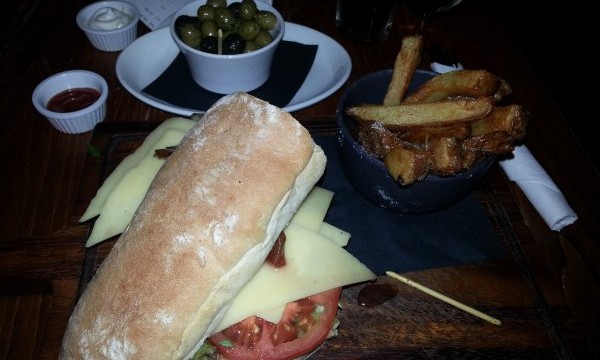 Where do a group of animated, hungry Italians (and other assorted nationalities) go to celebrate a birthday? Pizza? Pasta? Not on this occasion – instead, everyone made their way to the Black Lion in Kilburn, for a repeat of similar festivities a year ago. How did we get on?

Classiest-looking dish was a squid special with stir-fried veg, which the birthday girl Eliza described as “Lovely! Very delicate taste, soft batter and sweet & sour sauce. Cooked well, and very nicely served! I really like it when they spend some time on the presentation of the dish.”

Fish and chips proved popular, and as last time I had this in the Black Lion, the style was towards a less-crisp batter, which I’m still not quite sure whether or not is intentional, though the fish was fine and plates certainly seemed to be cleared.

I was a little nonplussed with my Cheddar cheese sandwich, though. At around the same price as the steak option (£9.95), I looked forward to a hearty, thick wedge of mature Cheddar, especially as previously when I grabbed a cheeseboard in the pub one Sunday afternoon, it turned out to be mammoth in quantity (and not lacking in quality either). However, here we had layers of thinly sliced, very mild cheese which looked somewhat ‘commercial’ and lacked flavour. In fact, upon reviewing the photos, I was surprised to see there was actually more than one layer present – it rather felt like a salad sandwich with just a mere snipping of cheese. 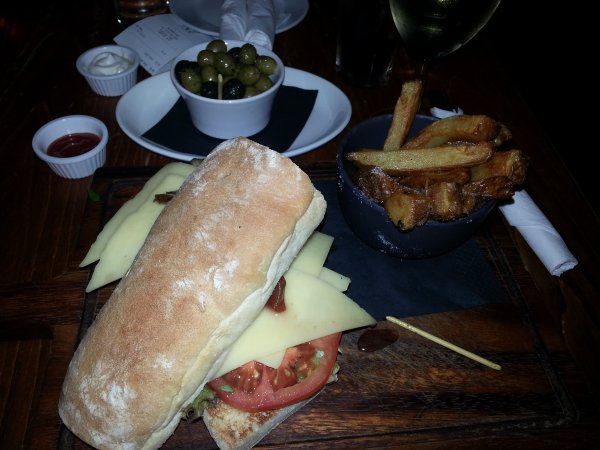 The thin end of the wedge?

The pear chutney wasn’t so much a chutney as some marinated, cooked pears, which were pleasing all the same, while the bread, salad, and general feel of it were fab; so it mystifies me as to why it should be let down in terms of the key ingredient – especially at £10 a pop?

Triple-cooked chips were a deep bronze colour, and tasted great if a touch oily. Crisp / fluffy, triple-cooked textures were not in evidence at all though, and I do think it’s important for such things to reflect what’s described on the menu (and for those preparing the food to know what to do on a technical level – competition is fierce out there!)

Friendly staff were on hand to assist with birthday cake presentations again, and all enjoyed the evening in this most attractive of local boozers. It’s a welcoming, relaxing pub, but perhaps just needs a bit of extra quality control to get it right back up where it belongs.

“They had no choice”: Kilburn’s Animal War Memorial Dispe...