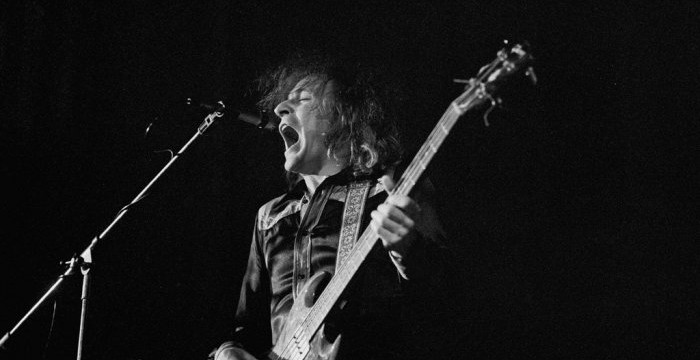 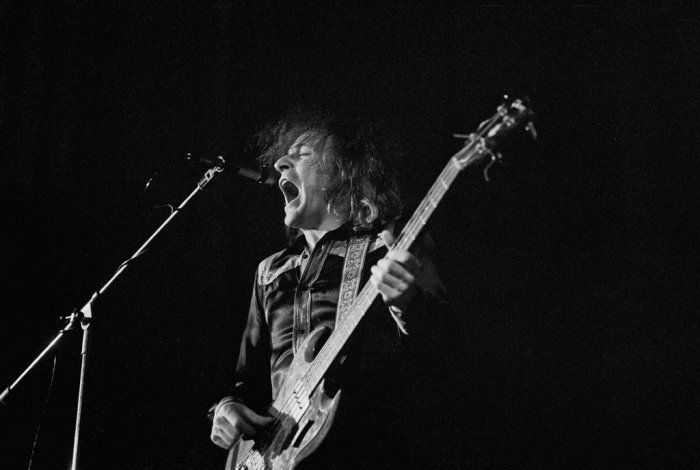 The great singer, songwriter and bass player, Jack Bruce died age 71 on Saturday 25 October. Jack was best known as a member of the supergroup Cream. He lived in and around West Hampstead in the 1960s.

Born in in Bishopsbriggs, north of Glasgow, Jack was the son of Charlie and Betty Bruce, who were working-class parents with strong left-wing convictions.

My mother sang Scottish folk songs and my father was a huge traditional jazz fan of people like Fats Waller and Louis Armstrong. But my older brother loved modern jazz. There’d be literally, physical fights in my house between my father and brother arguing about the role of the saxophone in jazz or something, real punch-ups.

As a teenager, Jack sang in a church choir, and won a scholarship to the Royal Scottish Academy of Music to study the piano and cello. Classically trained, Jack also played jazz and blues. To earn money he played in the Jim McHarg’s Scotsville Jazzband, but The Academy disapproved. Jack said; ‘They found out, and said you either stop playing jazz, or leave college. So I left college.’

In 1962, soon after he arrived in London, he shared a flat with trombonist John Mumford on the top floor of Alexandra Mansions on West End Green. Jack joined Alexis Korner’s ‘Blues Incorporated’, which included Graham Bond on organ, Ginger Baker on drums and Dick Heckstall-Smith on sax. In 1963, Jack and Ginger joined Graham Bond, with John McLaughlin (guitar), to form the ‘Graham Bond Organisation’ (GBO). They were very popular and played numerous times at Klooks Kleek in the Railway Hotel, West Hampstead. A session at Klooks was recorded by Decca next door and released as ‘One Night at Klooks Kleek’.

On 26 September 1964 Jack married Janet Godfrey, who was the secretary of the Graham Bond fan club. They moved to a flat at 25 Bracknell Gardens, just off the Finchley Road, and not far from Jack’s old home in Alexandra Mansions. The phone books show they were still there in 1968. Later, with the success of Cream, they bought a house in Chalk Farm.

During their time in GBO, Jack and Ginger had a very fiery relationship both on and off stage, and in 1965 Bruce left the band. He briefly joined John Mayall’s ‘Bluesbreakers’ with Eric Clapton on guitar. In 1966 Bruce was with Manfred Mann’s band when they had a Number 1 hit with ‘Pretty Flamingo’.

In May 1966 Ginger Baker had approached Eric Clapton about forming a band. Eric suggested Jack should join them, not fully understanding how difficult they had found it to work together in the Graham Bond Organisation. However, Ginger agreed to try it out and the three of them rehearsed at his Neasden home, 154 Braemar Avenue.

Cream was formed and they played their first gig at Manchester’s Twisted Wheel on 29 July 1966. Then on Sunday 31 July they played at the Windsor Jazz and Blues Festival and although it poured with rain, the band caused a sensation. Their manager Robert Stigwood thought Cream would have a similar appeal as the GBO and had already booked them into a number of clubs on the Blues circuit. So two days after their success at Windsor they played their first London gig – again at Klooks Kleek in West Hampstead on 2 August 1966.

Geoff Williams who ran Klooks Kleek with Dick Jordan, remembers Ginger asking him how much they would get for the evening. He expected a grumpy response to the reply “£89”, instead, Ginger expressed surprise and thanks, as the bands he played with previously at Klooks had usually been on about £50. Maybe Ginger felt good because Cream were about to embark on their first US tour playing stadia for five-figure dollar sums each night. Cream’s popularity grew very quickly and the only other time they played at Klooks was on the 15 November. This gig was recorded next door at the Decca Studios. Planned as an EP it was not released, as the band saw LPs as the future.

After great success, Cream spit up in July 1968, with a farewell concert at the Royal Albert Hall on 26 November 1968. In 1993, Cream were inducted into the ‘Rock and Roll Hall of Fame’ and they reunited to play four sellout shows at the Albert Hall in May 2005, and three in New York in October.

After Cream split up Jack began recording solo albums such as, ‘Things We Like’ in 1968 and ‘Songs for a Tailor’ in 1969. He played in several bands but struggled with his heroin addiction. In 2003, Jack was diagnosed with cancer, and underwent a liver transplant. Although his immune system initially rejected the organ, he recovered and kept playing. But his poor health finally caught up with him in 2014 and he died at his Suffolk home.

Gallery image with caption: Could The Railway become a community pub?