Taken from the famous 1960s recordings by Mel Brooks and Carl Reiner, this specially commissioned adaptation is a live re-creation of material from The 2000 Year Old Man sketches, in which an interviewer questions a man who claims to be 2000 years old and shares his memories and opinions on the history of civilisation, in a broad Yiddish accent. 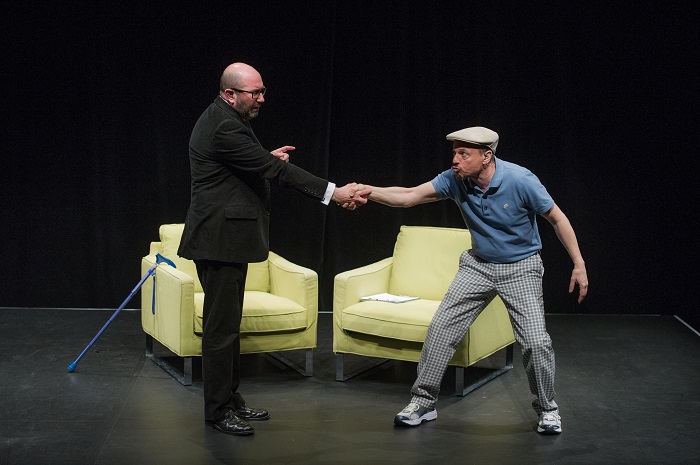 The hour-long show is funny and engaging, and very much a celebration of a simpler time for comedy.  There are decent performances from both sides, with Chris Neill’s Interviewer nicely understated to balance the larger-than-life 2000 year old man, played by Kerry Shale, enthusiastically channeling Mel Brooks.

The energetic performances go some way to bringing a modern feel to the work, it is pacy and they have made the most of the opportunity to physicalise what is essentially a verbal exchange, but for the most part the material itself feels, unsurprisingly, dated. There is very little subtlety at play and I think modern audiences expect to find layers in comedy which are simply missing from the broad stereotyping and sex gags we are presented with here. It’s funny, sure, but all just a bit one-note.

In putting the piece together, Kerry Shale has selected moments from the original recordings to create a cohesive whole. I’m sure this was quite an undertaking, and the team have done a great job of constructing the show so you can very rarely see the ‘joins’. There are a few moments which are laced with satire and this is where the work felt fresh and relevant, and got the biggest laughs of the night.

I went into the show with no knowledge of the original sketches, and I’m sure fans of Brooks and Reiner would appreciate this homage in a way that I, in my ignorance, am unable to. At an hour, it’s the right length and is a fun, lighthearted show that entertains and does provide several laughs, just not side-splitting ones. It’s a show which works well in the JW3 hall, a fantastic performance space, and I hope it will find an appreciative audience who are looking for good, old-fashioned gags.

What have I missed since March 9th?