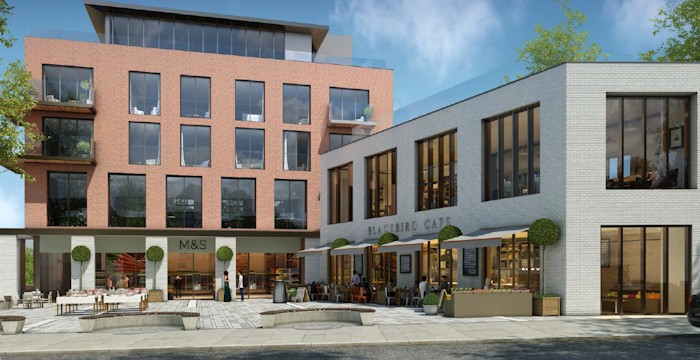 We promised to investigate why ‘West Hampstead Square’ is now known as ‘Heritage Lane’ and here’s the result of our sleuthing. Back in 2014, Ballymore applied to use the ‘West Hampstead’ prefix as the postal address for the development, while it was marketing it as West Hampstead Square. There is a very simple statutory consulting process – Camden asks the Fire Brigade, who refused on the grounds it would be a duplication in Camden (and hence could be confusing). What’s confusing is whether it is the square or the road at the side that is being named but either way, it’s hard to see what would be especially confusing.

Camden says that names have been turned down by the Fire Brigade even if there is no other one in the Borough on the grounds that there is one in the neighbouring Boroughs of Islington or Barnet.

When Ballymore was told that West Hampstead Square had been turned down, it came up with the following alternatives: Scholars/Heritage/Bohemia and Wordsmith with a suffix of Row, Way, or Lane. Seems like they were following the logic of each building being named after an author. Scholars was also rejected on the basis of duplication, leaving Heritage, Bohemia and Wordsmith. The rest, as they say, is Heritage.

The naming of buildings is governed by the London Government Act 1963 Section 43 and the London Buildings Acts (Amendment) Act 1939 Part 2, along with more recent policy guidance. If the streets of Kilburn were being named today there would no longer be a Kilburn Lane, Kilburn High Road, Kilburn Place, Kilburn Square, or Kilburn Vale. Cricklewood couldn’t have a Broadway and a Lane. However, recent developments elsewhere in London do include Oval Quarter near the Oval and redeveloped Kings Cross includes Kings Boulevard and Kings Place.

Planners say that we should foster a sense of place to create successful neighbourhoods. So they suggested this development have a square to provide some open space off crowded West End Lane, and the buildings were named expressly to reference West Hampstead.

One would have thought that someone at Ballymore would thought about all this in advance. The readers of West Hampstead Life came up with a concept behind the naming of buildings, giving them a sense of place. Since the building isn’t yet occupied, it’s not too late to change it. It doesn’t cost much and could be done if Ballymore wanted to, although there may be legal documents using the name Heritage Lane.

Yes, it was cheeky of Ballymore to ‘nick’ West Hampstead as the name for this development but given it lies next to ‘West Hampstead’ Overground station and opposite ‘West Hampstead’ tube it was not an unreasonable choice. It may well be that it will be called West Hampstead Square anyway. That could indeed be confusing for the emergency services.