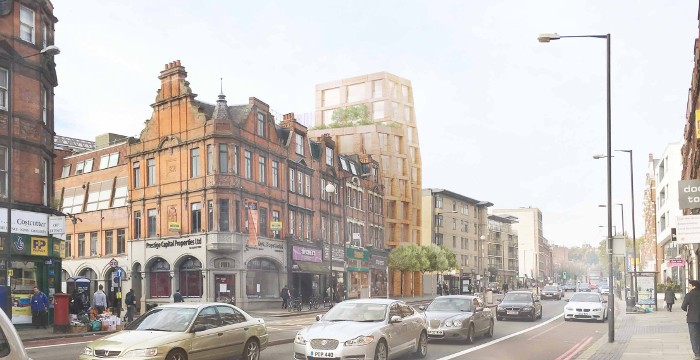 In the outer reaches of West Hampstead, where it abuts the Finchley Road (indeed next to Finchley & Frognal Overground station) is 317 Finchley Road. You may know it as the heavily locked former nightclub. It could be transformed into a ten (10!) storey building. Could be.

The statutory consultation period for this planning application has closed but the application is still under consideration so in reality it’s not too late to comment – see below. 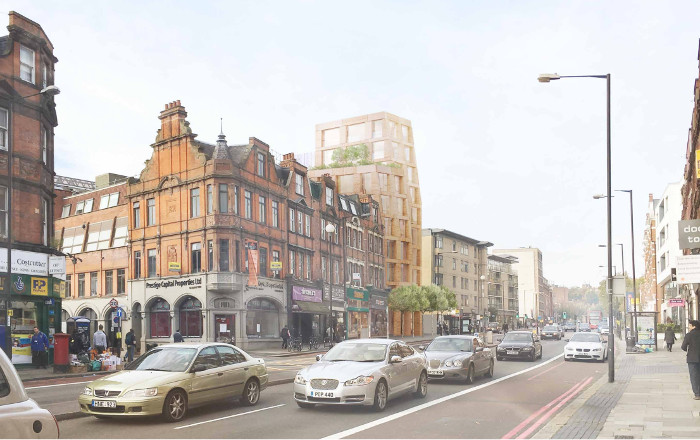 The proposed development, ‘Skylark Court’, is from Linea Homes, a small developer that has been increasing the size of its developments over the past decade. One of its earliest developments was in West Hampstead, converting a house on Fordwych Road into flats; a couple of years later it redeveloped a house on Holmdale Road. Skylark Court is on a different scale.

For 317 Finchley Road, Linea is proposing a contemporary development with floor-to-ceiling windows, which might look good in Berlin, but does anyone need that much of a view of the Finchley Road? The ten storeys will tower well above neighbouring buildings, and has been rationalised on the basis of the flats next to JW3 (which is quite a distance away).

You may recall there was another recent application to redevelop 317 Finchley Road, however this was for only part of the site (the old pub). This got planning permission for six storeys, but the developer then sold the site on to Linea, who decided to combine it with two adjacent sites – and add four storeys.

Alongside all the glass, the developer explains its choice of materials:

‘Materials, colour, texture, patterns, structure and construction were under consideration while sculpting and breaking down the mass against a multiple of further competing criteria, namely Network Rail, neighbouring daylight and sunlight amenities, overlooking, road noise and atmospheric pollution, street and townscape, fire escape’.

No, we can’t understand it either, but it appears they want to clad it in some sort of red stone (see illustration below). What’s wrong with good old brick?

Berlin or the Finchley Road?

One final thing to note is that Linea is proposing a completely new entrance to Billy Fury Way, between the development and the Overground station, while still keeping the old one, which seems a bit odd.

The previous application attracted only a couple of comments, but this one has already reached over twenty, 95% opposed on grounds of height. If you want to add your comments on the application (2016/2910/P) you can find the related documents here or  you can comment here.

Gallery image with caption: Are revised plans for Mario’s super or not?

Gallery image with caption: Only one hurdle left for Neighbourhood Plan