John Mansook, the young chairman of Brent Greens, and the Green Party candidate for H&K  was out for a coffee last month with another member of the Brent Green party discussing how to take the local party forward.

The next day Theresa May announced the snap general election, and there swiftly followed an email asking if John wanted to run. He said yes – and less than a month later he’s talking to WHL on a park bench in Queen’s Park.

John is a fitness trainer. He left university and couldn’t find a job so he turned his hobby, kickboxing, into a career as a sports coach. He now works with all age groups from the elderly, people with dementia, the disabled and – his real passion – working with kids and toddlers to get them all exercising. 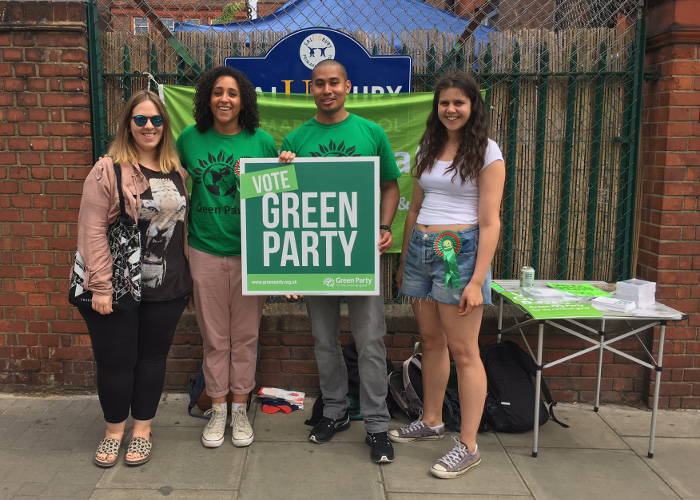 The Green Party is definitely at the David rather than the Goliath end of the British political system. It has a small team of local activists, including Poppy – its local secret weapon; but despite increasing evidence of climate change, Green issues have slipped down the agenda. Why aren’t younger members getting involved? “The meetings and politics can be “off-putting for young people,” says John.

The most immediate ‘Green’ issue in this local campaign is recycling and rubbish. John, who lives in Brent, feels that there should be a return to weekly collections in H&K as, despite the good intentions, there isn’t the necessary buy-in. In Brent “they no longer chase you down and give you information”.  As a sports coach he is aware that engagement is key, but is also aware it isn’t easy.

There was some controversy about the Greens putting up a candidate at all in Hampstead and Kilburn. They got 2,387 votes last time – greater than Labour’s winning margin of 1,132 votes. So how would he feel if Tulip lost by a smaller margin that the Green votes? “Personally, anything but Tory. But I wouldn’t say I’m preventing it happening. We did offer to stand down as part of a progressive alliance, but it is a two-way thing and there was no movement by Labour. Ultimately the members of the Camden and Brent Greens wanted a candidate to represent them.  But yes – I’m being asked about that a lot today!”

What has surprised him the most about the campaign? “I have been surprised how supportive and understanding people are. It’s very daunting because this is my first time doing it but for the most part people have been very kind and they recognise you are doing something for your community. It really has taken away a lot of that fear factor about standing”.

Finally, why should we vote for John Mansook? “I’m not your average politician, I’ve been on the receiving end of Conservative and Labour policies; tuition fees, lack of housing. So coming from that perspective I can really empathise with people about how they feel about these issues”.

Gallery image with caption: Bouquets for Tulip as she surges to comfortable win

What have you missed since May 22nd?