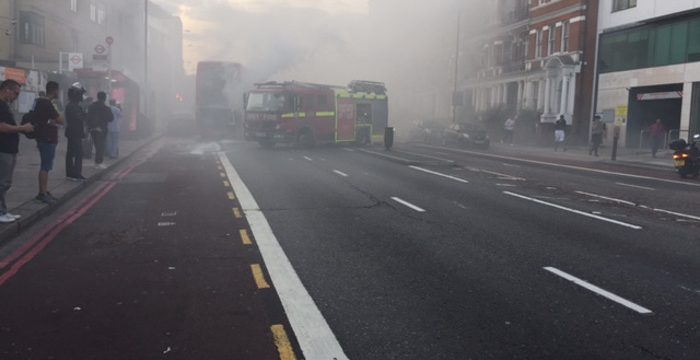 Apparently, 42 of us are Lottery millionaires,  in our postcode area. Really National Lottery?

Our latest insight was with Ted Booth, the Library ‘writer in residence’. Ted brings poetry to West Hampstead, literally (in all senses).

There was a funeral on Quex Road for the leader of the former leader of the GMB, Mary Turner. Jeremy Corbyn, Sadiq Khan, and several MPs, were all there to pay their last respects.

Last week a burning car, this week … a burning bus. the 113 caught fire on the Finchley Road on Sunday evening. 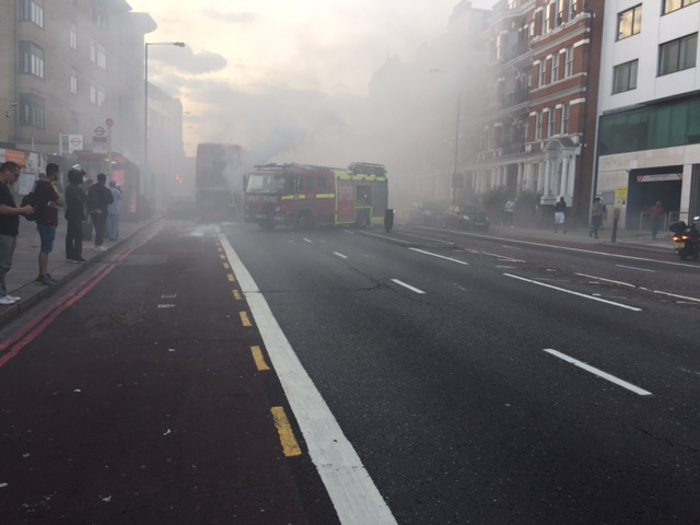 113 on fire on the Finchley Road. Image thanks to Mark Hutton.

Still problems with rubbish collections, including this West Hampstead resident!

The lifts are out of action in Ellerton (the council block on Mill Lane) and a mother, who lives on the 11th floor, slipped on the steps while carrying her one year old baby . Baby unharmed but mother bruised her elbow and jarred her neck.

Paul Perkins, the long standing CEO of the Winch (the youth centre in Winchester Road) is leaving and moving on to a new role at Save the Children. WHL wishes him well.

Getting married? Someone donated a number of wedding dresses to the Scope store in West Hampstead.

Lena’s Cafe 2 is set to reopen ‘in a couple of weeks‘?

The tiny new coffee shop opposite the Overground station has opened – good luck!

We were quite excited to find Teresa (of @ladudufood) delicious sauces for sale in the fruit and veg shop on West End Lane. We also heard she has been doing online demonstrations.

Is it tough on the streets of West Hampstead?

A man was attacked and found unconcious on Skardu Road.

Maybe it is – there were a couple of attempted burglaries on Crediton Hill.

There was an incident on the KHR, police out in force but we didn’t find the cause. Does anyone know?

Have you seen this missing Kilburn man?

Or this missing French woman who was visiting West Hampstead?

How many shopping days to Christmas…?! The Village Haberdashery will be running ‘maker market’ on Sundays from October to Christmas. Do you know a designer-maker who might want to showcase their products? If so let them know …

Go and see +-Human, the Random International installation at the Roundhouse! One of top ten tips for August – Time Out gave it 4*, we give it 5*. It’s £5 during for the installation (under 26s go free) and £15 for Fri/Sat nights with Wayne McGregor Dance

Have any old photos of how West Hampstead and Kilburn are changing? Take them along to the ‘Kilburn: Now and Then’ tent at the Kilburn Grange Festival on Saturday.

The FoFG screening of ‘Toy Story’ on Fortune Green was success – this tweet caught the mood.